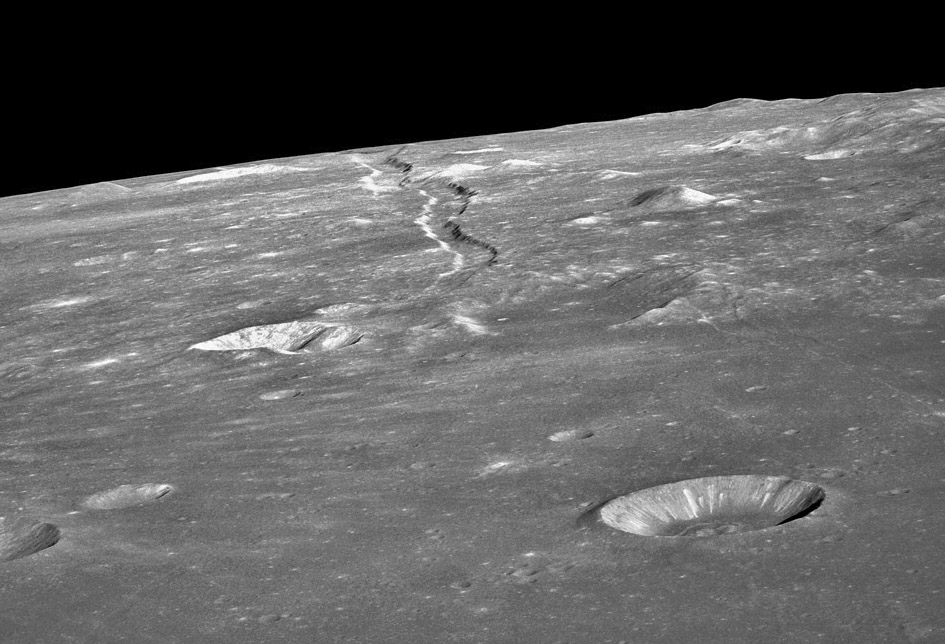 Forty years ago today, a phrase we will hear often during the next months and years, Apollo 10 entered lunar orbit for a nearly full rehearsal for the Apollo 11 landing two months later. The astronauts circled the Moon for two and a half days, with Tom Stafford and Gene Cernan in the lunar module sweeping down to within 16 km of the surface, and John Young up higher in the command module. The crew took 9 magazines of Hasselblad 70 mm pictures, including many classics. This marvelous oblique view was obviously taken by an alert human, waiting for a perfect composition. We look pass Manners, up the Ariadaeus valley. The rille, which looks relatively linear when seen from Earth, is notably sinuous with three or four gentle bends. If the rille follows a dike, as is often modeled, then the question is why was the dike sinuous? This low oblique perspective also highlights the missing rim where the probable simultaneous impact craters Ariadaeus and Ariadaeus A overlap. And the tall isolated hill north (right) of the rille is an oddity. It is part of the south rim of a nearly destroyed crater, but why is it vastly taller than any other rim segment? When admiring this wonderful image, recall that it is not the famous Apollo 10 view of this prominent rille!