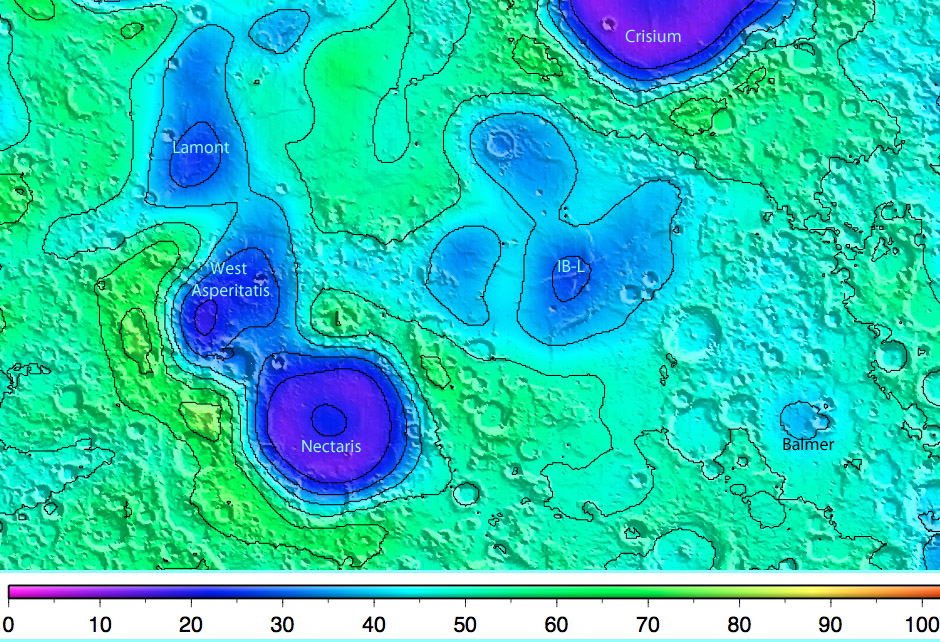 What causes holes in the ground? For the Moon, the only thing we know is impacts. Impact cratering digs a hole about one-third as deep as the crater is wide for small craters, with the ratio falling off to perhaps 1:10 or less as diameters increase. To dig deep holes requires big cratering events. This recent map of the lunar crustal thickness from Kaguya is the most accurate in existence. It reveals major crustal thinning for large basins - for example the Crisium Basin thinned the crust from about 70 km thickness to 5 km. These large anomalies were well known from earlier data, but much smaller crustal thinnings were harder to detect, often being lost in measurement uncertainty. Here are a couple of better resolved crustal anomalies that probably represent buried impact basins. Starting at upper left is a thinning of 10-15 km exactly centered on Lamont. The origin of this ring of mare ridges has long been controversial, but with this new data it appears that USGS mapper Dave Scott was correct, 36 years ago when he proposed it was a small impact basin covered by Tranquillitatis lavas. More surprising is the much stronger thinning anomaly centered west of Sinus Asperitatis. The existence of the West Asperitatis Basin explains the continuation of scattered high topography northwest of the curved rim of the Nectaris Basin. Like many other basins the WAB lacks a rim on one side - the east. Moving into Mare Fecunditatis is another surprising basin. This is surprising because although a basin is expected under each roughly circular patch of mare, this one, the Ibn Battuta-Lindbergh Basin, is smaller than expected. The contour lines don't seem to follow the mare ridges, suggesting a complicated story. Finally, at bottom right is a small anomaly that gives confidence in the others. The thinning is right in the middle of the previously hypothesized 500 km wide Balmer-Kapteyn Basin. As you explore the entire crustal thickness map the most unexpected thinning is for the Crüger Basin, which LPOD has already explored.