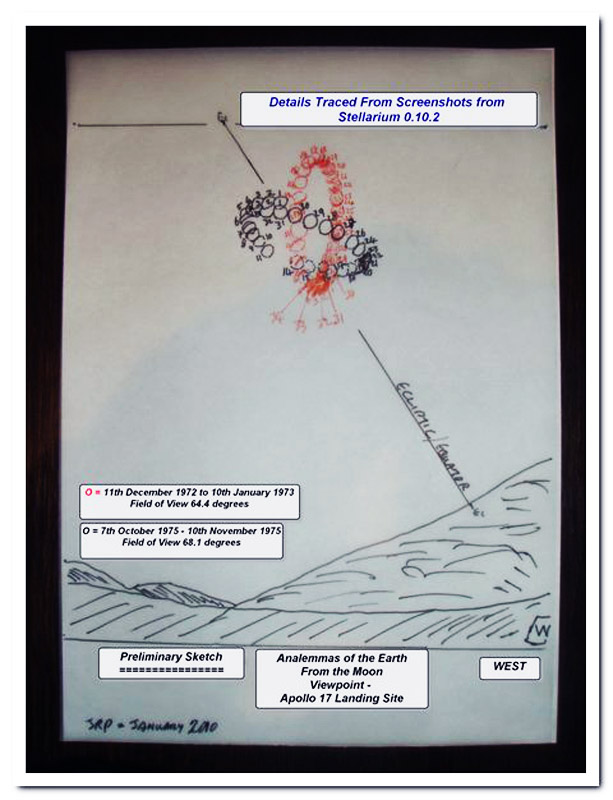 Recently, John sent me an image he created with Stellarium showing the December 31, 2009 lunar eclipse as seen from the surface of the Moon. Because I had just been discussing the placement, size and phase of the Earth in the lunar sky for a new NASA videogame, John and I started talking about that and the ability of Stellarium to depict it. After some experimenting John wrote that some moon-earth relationships have been unexpectedly demonstrated to me by Stellarium and its ability to speed up time. Firstly, the movement of the Earth in the lunar sky, reflecting the libration which can be seen from here. A sort of terrestrial analemma. That got me excited and I asked him if he could create a single image depicting the Earth's annual motion. It turned out that that was complex, but the monthly movement in the lunar sky due to librations was doable. Except that during a series of daily images by Stellarium the background stars move, creating a severe distraction. After some more experimenting John produced this preliminary tracing that shows the locations of the Earth during two months. The red circles show the Earth in the lunar sky (with the dates near the circles) for the period Dec 11, 1972 to 10 Jan 1973. The first date corresponds to the landing date of Apollo 17, and the sketched foreground is from an Apollo 17 photograph that Stellarium provides. Each image of the Earth was depicted for 20:00 UT (close to the landing time). The black circles show a month of Earth movement in 1975 to demonstrate a similar libration analemma but at a different angle to the ecliptic. Of course these circles don't illustrate the change in phase of the Earth through the month, from new to full and back to new. I don't think that astronauts on the lunar surface would notice the Earth's day to day movement unless they were close to the poles and the Earth would be near enough to the horizon to notice the movement compared to landmarks. A challenge now is for someone to prepare a more graphic depiction of the lunar analemma, depicting phases too, either with software or perhaps an artist's brush!