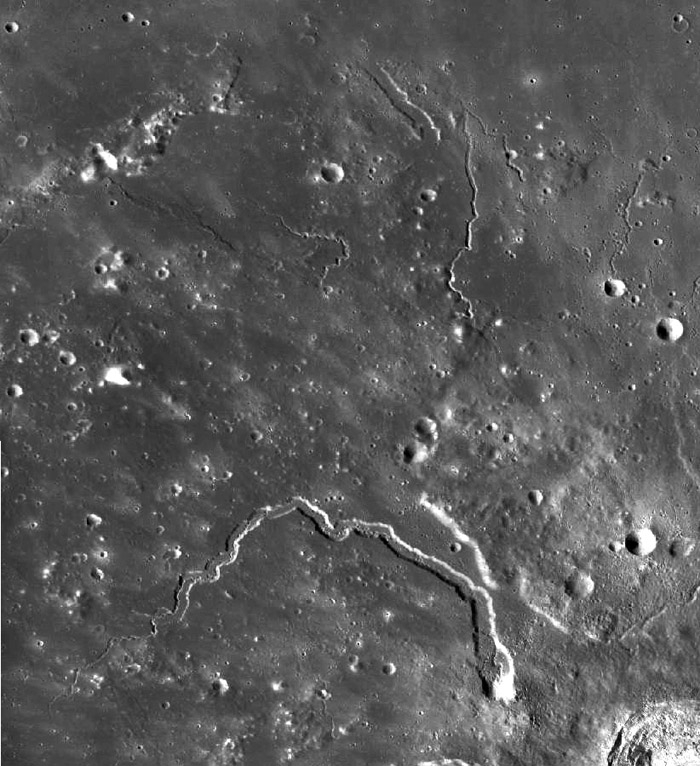 In yesterday's LPOD Howard Eskildsen made the intriguing proposal that a 5 km wide trough at the northeastern end of the Aristarchus Plateau was either an earlier outlet of Schröter's Valley or part of a similar valley fed by a now hidden source. This fascinating suggestion would explain the origin of the trough (once called Fossa Caruso), which is much wider than any sinuous rille other than Schröter's Valley. There are some hints that perhaps a wide rille could have gone from the Cobra Head to the Caruso depression, but none are very convincing. But it is true that there are numerous normal sized sinuous rilles with vents along the east edge of the Plateau (and almost none along other sides). Perhaps there were many magma conduits to the surface on this side of the Plateau because it was uplifted more - it is higher - than on the west. This leads to the speculation that a large tilted uplift could be due to a large amount of magma pushing toward the surface along the east side, and that might have included a vent for the 5 km wide rille now represented only by Caruso. But, once again, there is no compelling evidence for where that vent might have been. In fact both ends of Caruso are sharply truncated. On the north it does drop down towards Procellarum so we can speculate that the northern end of the trough was buried by Procellarum lavas. But that is the downhill direction so the source vent must have been to the south. So the trough does look like it could be a piece of a Schröter's Valley size rille but I don't see where the rest might have been - do you?