Difference between revisions of "September 18, 2019" 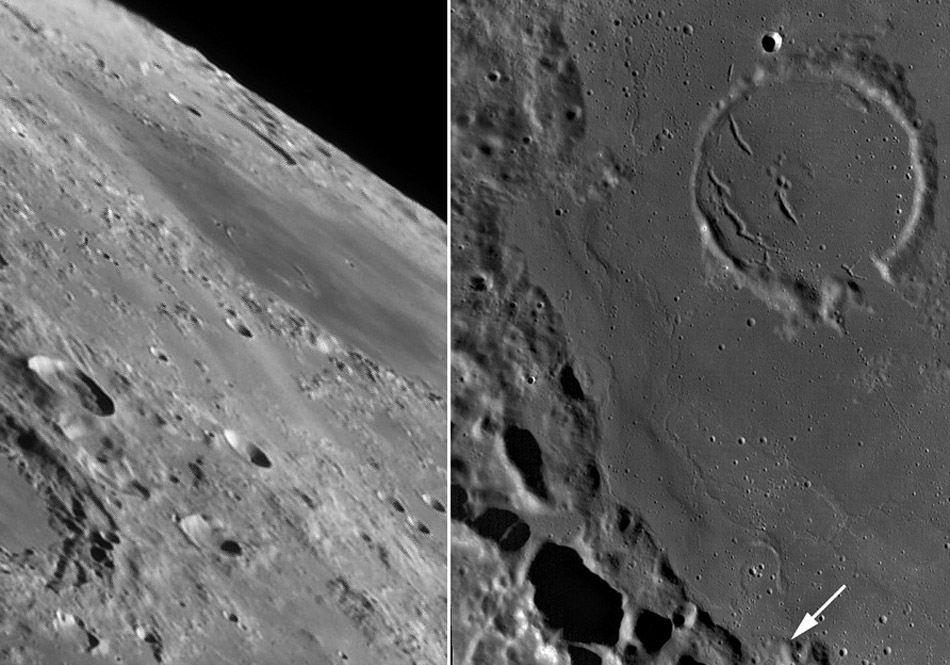 A year ago Stefan delighted LPOD viewers with a great view into the Humboldtianum Basin. An excerpt of that image (left) provides context for the best high resolution view in existence for part of the basin floor (right). This 57 km wide piece of a LRO Wide Angle Camera image provides enough resolution to interpret parts of the history of the mare fill. The shadowed curved mountains at bottom left are part of the Humboldtianum Basin inner ring that I have called the Bishop Mountains rim. At top right is a 27 km wide flooded crater that lacks a designation. It needs one because it is interesting and will be talked about. It appears to have been a standard small complex crater that was surrounded and infilled by Humboldtianum's mare lavas. What is remarkable are the linear depressions on its floor. These aren't crater chains, nor normal rilles, but seem like they could be push ups and pull aparts of the cooled magma. The longest one on the left has an upraised edge like some of the circumferential rilles in Pitatus; maybe these should be called puckered rilles. Unlike the Pitatus examples these are not concentric and thus aren't as likely to be due to subsidence. Ignore the arrow which points to the area of a high resolution LRO image, but look where the mare meets the basin edge northwest of the arrow. There appears to be a small mare ridge where the mare and rim meet. I wonder if this is a fold formed when the mare lava ran up against high ground and could go any further but was still pushed by lava. Three more quick things and then you can return to your Sunday morning breakfast: (1) Note the submerged crater at the north end of the ridge - its rim casts a half-round shadow. (2) What is the source of the long chain of very small craters at the bottom of the large unnamed crater? (3) Notice the concentration of craters along the right side of the floor of the unnamed crater? That must be a piece of older floor material. OK, pass the pancakes, please.