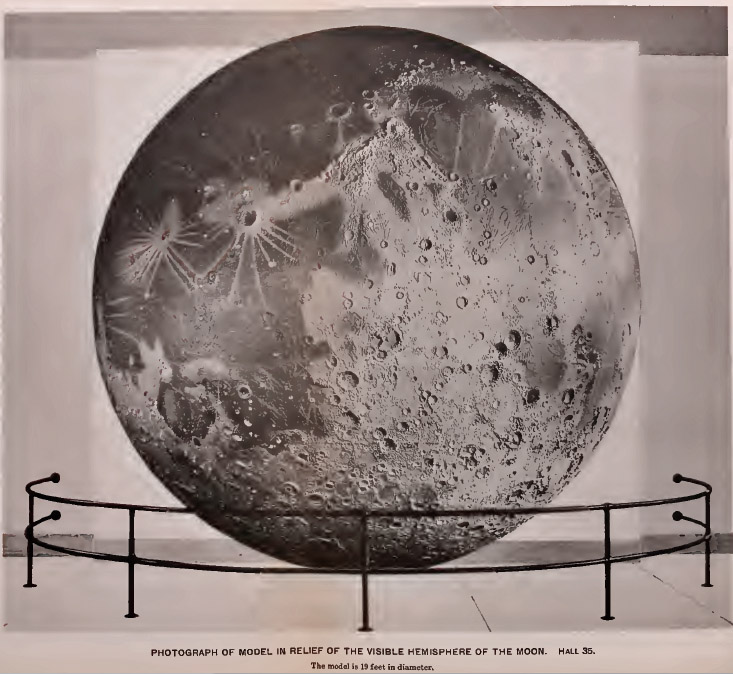 image from Field Museum of Chicago

Globes of the Moon are tactile encapsulations of a spherical world. And the bigger they are the more special they are - even though the large ones usually can't be touched. This now forgotten hemisphere - 19.2 ft in diameter - is tied to one of the greatest Moon mappers ever. According to a 1925 leaflet from the Field Museum in Chicago the massive Moon model that the Museum then had on display was made by Thomas Dickert, Curator of the Natural History Museum of Bonn, Germany and J. F. Julius Schmidt, the most famous Moon-mapper of the second half of the 19th century. Since Schmidt died in 1884 the model was at least 40 years old in 1925. The depiction of the surface seems very specific, with each feature being identifiable with a real part of the Moon. But there is a great inconsistency in depiction - the south is seemingly fully executed, the equatorial areas less so, and the northwest quadrant is mostly missing. Is it possible that the northern half was done after Schmidt died? The final question, 85 years later, is what happened to it?