Lava or Ejecta? An Answer At Last! 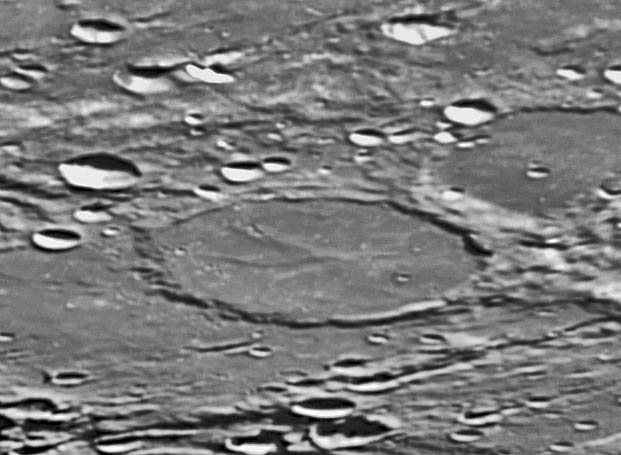 image by K.C. Pau This was the last of the old series LPODs, published June 15, 2005. I was in Nicaragua and couldn’t get into the LPOD server that had crashed, so Anthony Ayiomatitis published some LPODs on his site, but few people saw them.

Wargentin is a strong candidate for the title of the Moon’s most peculiar crater because it is so strange. Wargentin is one of three close-spaced craters (Nasmyth and Phocylides are the other two) just southwest of Schickard. Phocylides and Nasmyth are normal older craters that have been shallowed by some infilling material so that their central peaks have been buried. But Wargentin looks like it’s shalowing didn’t stop - it has been filled to the top, maybe to overflowing, but with what? There have really been only two possibilities - lava or ejecta from the nearby Orientale Basin. There are two reasons for thinking basin ejecta might be the answer - the Orientale Basin is nearby, and volcanism isn’t. But there is a powerful reason for thinking ejecta is the wrong reason - the other nearby craters aren’t filled - it hard to image basin ejecta filling one crater and missing nearby ones. The evidence for volcanism is that Wargentin’s surface is generally smooth but has a crater-wide ridge, strongly reminenscent of wrinkle ridges in maria. Mare lava is dark in full Moon conditions, but Wargentin is bright, except for one small dark halo crater on the bottom right side of the image. Spectral studies by David Blewett of the University of Hawaii and his colleagues demonstrate that the dark ejecta is mare basalt. This proves that Wargentin is filled with dark mare basalt, and we can infer that its original dark surface has been dusted by highland ejecta (from Orientale?). Hooray, now we know!

Register, and click on the Discussion tab at the top of the page.
Retrieved from "https://www2.lpod.org/index.php?title=October_3,_2006&oldid=21969"