How Did It Get There? 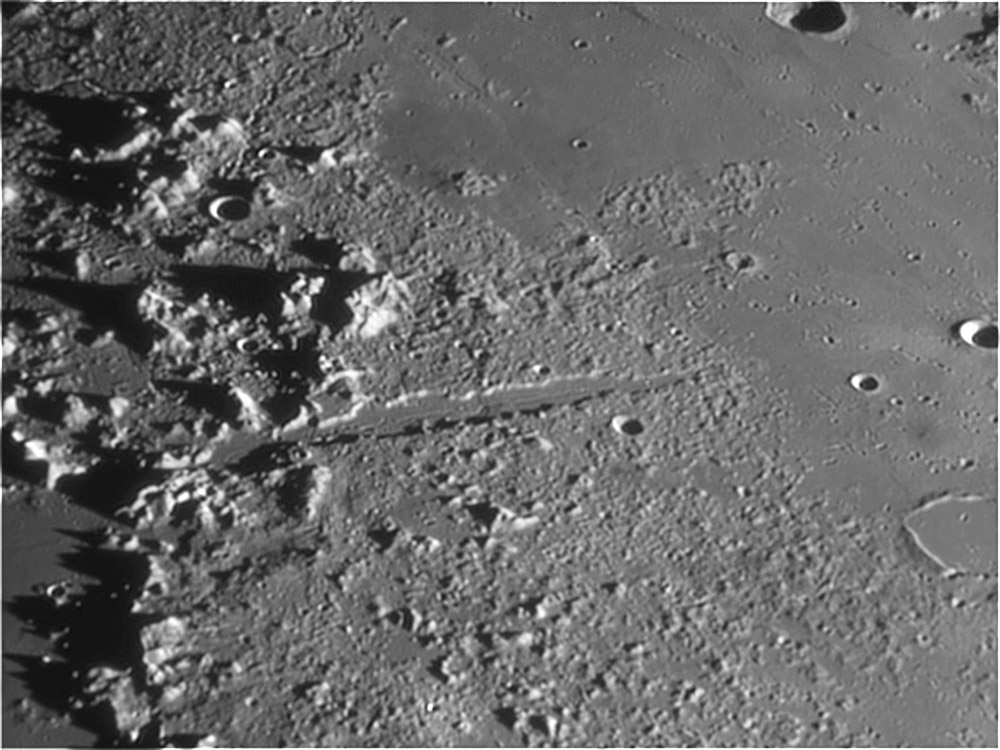 I once deduced the energy of a small volcanic eruption In Ethiopia by measuring the diameters of boulders ejected by the explosion. Blocks were largest high on the crater rim and smoothly decreased in diameter with distance from it. Looking at Dietmar's image of the Alps Mountains suggests a more complex pattern of ejecta dispersal for the impact that formed the Imbium Basin. Notice that there are at least three general sizes of the blocks (actually they are all mountains, kilometers or more in width): There are small blocks (~2 km wide; the crater Trouvelot is 9 km) near and far from the basin rim front (on the left side), with a zone of larger ones (~5 km across) about half way between the front and the distal end of the ejecta. And then there are the big mountains (widths of 10-20 km) that are in a line along the front to the south of the Alpine Valley, but more widely dispersed north of it. The lack of a transition from large to smaller blocks from left to right suggests that there was not a single explosive event that emplaced all these mountains. Or perhaps there was - as nearly all lunar scientists would agree - a single impact event that transported material away from ground zero by different mechanisms. For example, the smallest mountains and the even smaller "sand" between them could be the equivalent of rock flour that was ground up in the target area and ballistically deposited widely. The large mountains may have not been thrown thru space but simply pushed up and flipped over along the edge of the basin rim. We see this at the rim of Arizona's Meteor Crater where local rocks have simply been overturned by the force of the explosion below them. The wider distribution of big blocks north of the Alpine Valley suggests that that segment of the basin rim had a more complex overturn, one we may never figure out. I don't have a grand explanation for all this, only a growing appreciation that there is some order in the apparent chaos of ejecta. Finally, note the dark halo near the right edge of the image. Neither the Clementine nor Lunar Orbiter IV images makes clear if this is a dark halo impact crater or a small volcanic eruption - strange.

(1) It is interesting how the Alps and their shadows look jagged in this image, while in the Selene/Jaxa image in yesterday's LPOD the Alps look rounded and worn down. Is this difference in appearance simply caused by the angle of illumination?**
--Bill

(2)
Just a query on the big blocks (mountains) thing...etc., seen on the edges (rims??) of these huge impacts basins all over the Moon. I've often wondered if when these blocks or mountains slump inwards after the impact, do they, in fact, pull in nearby, other ejecta blocks and mountains more distant from them? If so, would not the slopes of these blocks and mountains be more steeper on the inward side facing ground zero, while slopes on the opposite side (looking away from ground zero) might be less steep?

(3) Bill - Yep - just the lighting angle. That is why Bonestell and many others thought the lunar mountains were steep and jagged. But under less extreme illumination they are rounded and have generally gentle slopes.

Questioner #2 - Yep again, in that there is a collapse inward leading to a steep slope. Basins are just big craters so think of the inner steep rims - as we saw yesterday for Plato - with the Altai Scarp and the Apennine Front being great basin examples. But I don't think those collapses pull toward the center more distant blocks - the scarp shows that there is a clean break.
--Chuck

(4) Thanks Chuck Re: steep slopes etc., I suppose that this criteria possibly applies also to any craters/basins formed on any planets/moon?
John -- www.moonposter.ie Chuck: Yep.

(5)
hi chuck,
thanks for the pick! I really do appreciate this very much!
BTW: we had a discussion going on on some of the web forums about the size of the narrow rill on the bottom the alpine valley. we could not find any numbers in terms of the width of that small rim.
do you have any idea? or anybody? I am really curious!
thanks again and best regards,
Dietmar
www.stargazer-observatory.com

(6)
Dietmar:Forgive me beforehand if my attempt to answer your query is not what you're looking for.I understand that the length of the valley is roughly 160km long and widens in parts to upto 20km. Judging by these stats alone, the rille would probably be around the 1 km-wide mark, but don't quote me on this :-)Another fascinating thing about that rille I found out awhile back was that its formation is a bit curious. Apparently, several small craters linearly run along its length, therefore, suggesting its formation is tectonic as gas escaped through a fracture. However, the curious bit is that the rille is seen to meander in parts; which suggest its formation might be volcanically-related as a lava tube possible collapsed to produce the characteristic meander type rilies. So, is its formation 'tectonic' or 'volcanic' -- a weird one this I think. Chuck, however, will have a better explanation to all the above, so again, forgive my ignorence.John -- www.moonposter.ie

(7) Dietmar - Using the SMART-1 image and a diameter of 9 km for Trouvelot I get a rille width of 1 km, just as John suggested.
--Chuck

(8)
Thanks John and Chuck! John, great website BTW. I will take a closer look!
be well guys, Dietmar

(9)
Dietmar: Thanks for kind comments Re:my site. Can I return the compliment also about your own -- very nice -- and, WOW, WOW, WOW on those observatories you got there.John -- www.moonposter.ie