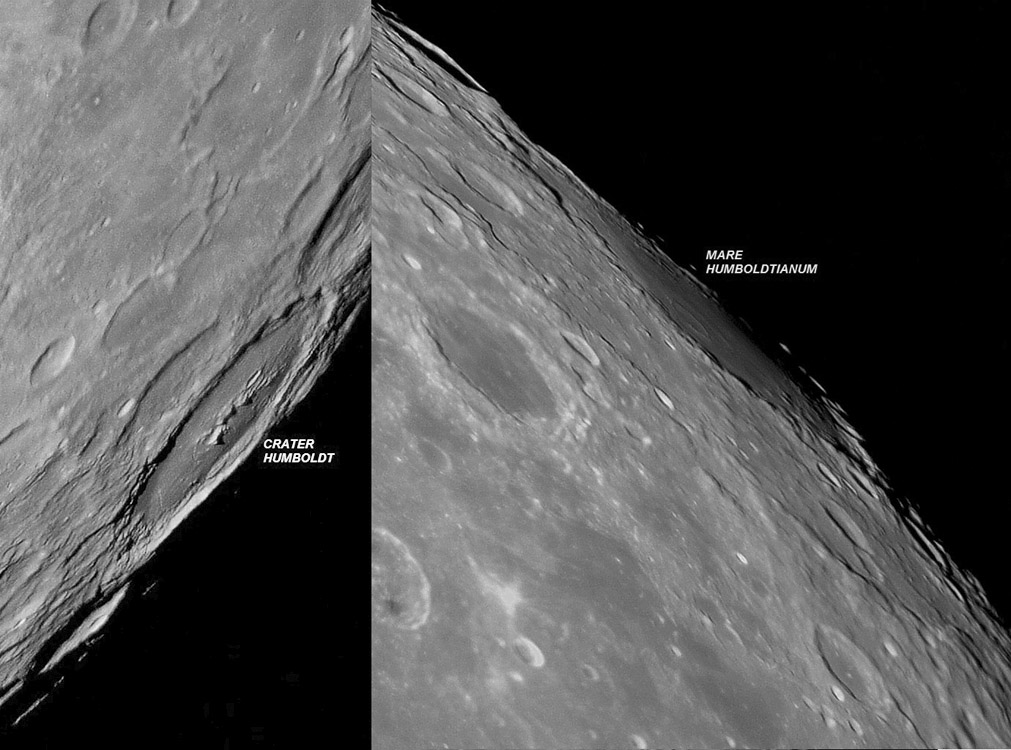 It's rare for a member of a family to be honored with a name on feature on the Moon, imagine two brothers! Friedrich von Humboldt (1767 - 1835) was a philosopher and linguist who designed the Prussian education system. He was also the founder of the University of Berlin. His younger brother, Alexander von Humboldt (1769 - 1859), was one of the greatest geographers, naturalists, and explorers of the 19th century. Here we have two different personalities. The older brother liked to work inside a classroom. The younger brother enjoyed field work. The one who lived more outdoors had a longer life! The brother who traveled extensively to explore the great mountains, fields and distant forests, received as tribute on the lunar surface, a sea of ​​dark lavas (Mare Humboldtianum) inside a large multi-ring impact basin (Humboldtianum Basin). The main ring of the basin, with 650 km in diameter, penetrates partially in hidden and less explored side of the Moon. So, the younger brother and greatest geographer, surely would like to explore there! However, the great educator received a beautiful crater full of complex morphology, 189 Km in diameter (crater Humboldt). Images taken by Apollo and LROC show that It has a internal floor flooded by lava, with smooth and flat parts, and rough parts too. The floor also has a dark pyroclastic material deposits (volcanic ash). The floor hosts some impacts of small craters, including a perfect concentric crater. The big crater Humboldt has a set of concentric and radial rilles, a chain of central mountains, terraced inner walls and outer rim with rampart. With all these characteristics, if the crater Humboldt were closer to the lunar center of disc, it would be one of the richest and most compelling targets on the Moon for ground based telescopes. Thus, a complex crater that looks like a "theme park", which boasts many characteristics and details, would be an excellent object of study in the classroom for the educator brother. Both features named for the Humboldt brothers are positioned near the lunar limb, and thus are very difficult to be observed in great detail. The two brothers continue together on the Moon because they are observable in the same period (2 days after new Moon or 1 day after full Moon).

Tomorrow's LPOD: Seeing Into the Dark