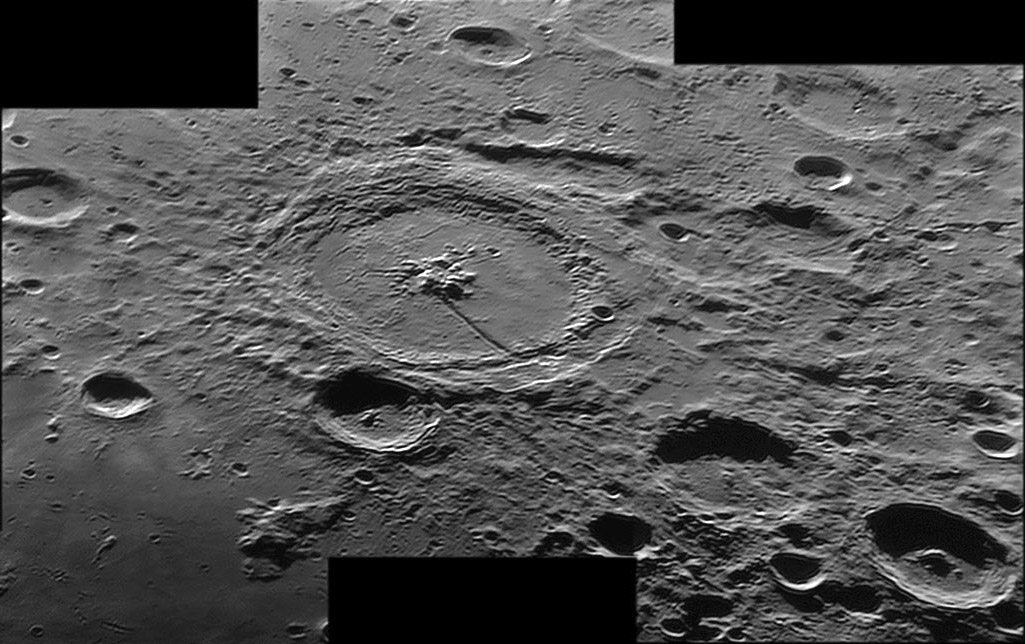 Most interest in Petavius is focused on its interior, with the giant trough, squiggly rilles, dome and pyroclastics - all characteristics of a floor-fractured crater. This image draws attention to things beyond the rim. Most impressively, the smooth material to the right (south) is very extensive, filling every low spot for a distance of about 60 km. This is considered to be impact melt, but it is relatively ancient since Petavius was mapped by the US Geological Survey folks as Lower Imbrian - about 3.8 billion year old. I've always said that the melt just north of Theophilus was the easiest to see with a telescope but this melt covers a larger area. I assume that the concentration of melt on the south means that the projectile that formed Petavius came from the north at a low angle. This would imply that Petavius' peculiarly wide rim on the south is due to an oblique impact but the rim is different than any other down range rim, isn't it? Palitzsch and its valley to the east/southeast of Petavius are oddities. Probably they are all one feature, a basin secondary crater chain. The valley is about radial to the Crisium Basin, but I would expect the largest crater to be nearest the source, but it isn't. Finally, we can note the battered Snellius Valley, from lower right to upper right, which is a basin secondary chain from Nectaris. About half of the floor of Snellius iself has been covered by ejecta from nearby Stevinus, an indignity it will have to live with for more billions of years.


Yesterday's LPOD: Four And One