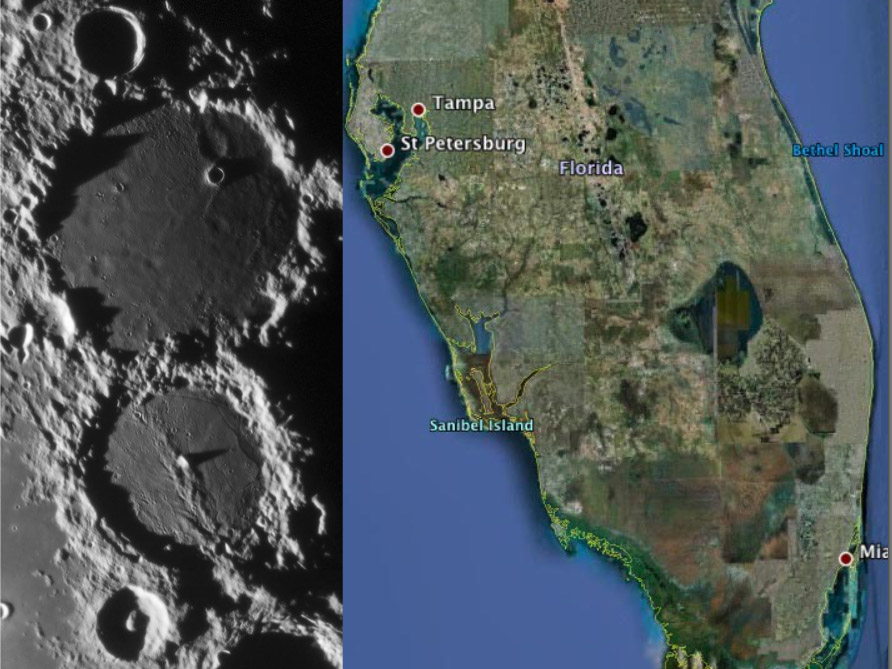 The Moon is another world. We only see it from a distance, losing our sense of scale. But we have a general feeling of sizes. Clavius is big, Imbrium is huge, Ptolemaeus is .... smaller, but how small. The Moon WIki says its 164 km wide, but how big is that in terms of things I am familiar with? That is what David wondered too, so he made some comparisons, scaling Google Earth pictures of parts of the USA to match lunar images from recent LPODs. Ptolemaues turns out to not really be so large, its about a two hours drive in Florida, if traffic is light, from rim to rim. From another of David's comparisons, Mare Crisium is about the same width as the state of Michigan - a half day or so drive, if there is no blizzard. And Hadley Rille is similar in width to the Ohio River - a strong swimmer could make it across to the other side. Giving Earthly scale to lunar features makes them seem smaller to me, but also impresses how many details important at a human scale we don't appreciate when we see the Moon or Earth at the same scales.

Related Links
Ptolemaeus from Rick Smith, and Florida from Google.