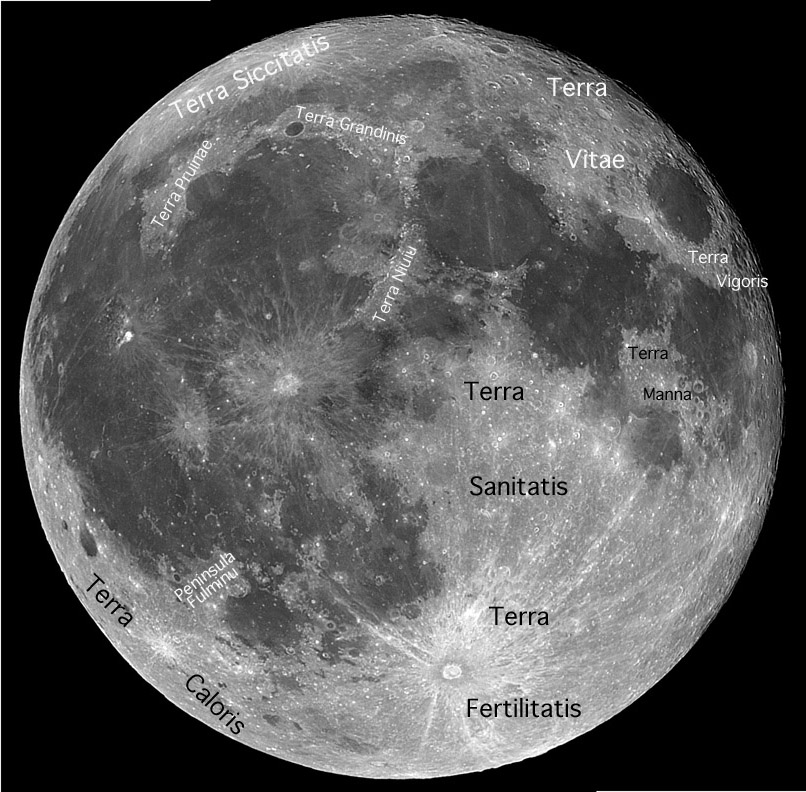 Dark material chauvinism led to the preservation of Riccioli’s names for mare features but elimination of nearly all of his names for bright areas. Pali Somni and Putredinis were the only bright names that survived and they are actually rather grayer than most of the lunar highlands. I have often wanted to refer to various lunar bright areas by a name and am tired of not having any. I hereby resurrect some of Riccioli’s bright names from his 1651 map. For example, what do you call the brightish area poleward of Mare Frigoris? This area is well defined and has various homogenous characteristics and should have a name. It does. Riccioli called it Terra Siccitatis; flows off the lips doesn’t it? And it means Land of Dryness, which is certainly appropriate since it hasn’t rained there for a very long time. The bright region from Plato to Calippus is Terra Grandinis, the Land of Hail, and the similar region north of Sinus Iridum is Terra Pruinae, the Land of Frost - just what you’d expect near a frigid sea. The large highland region north of Mare Crisum is the Land of Life, Terra Vitae, and to the south of Crisium is Terra Vigoris, the Land of Vigor. One of the bright spots on the Moon most in need of a name is the block of land surrounded by Nectaris, Tranquillitatis and Fecunditatis. Riccioli thought so too, he called it the Land of Manna, heaven-sent food that saved the ancient Israelites. The Great Peninsula was called Terra Sanitatis, which merges with Terra Fertilitatis; lands of healthiness and fertility. The bright southwestern rim of the Moon is Terra Caloris, Land of Warmth, and the bright block between Humorum and southern Procellarum, a place that clearly needs a name, is Peninsula Fulminu, Peninsula of Thunder. Like the familiar designations of the maria, these names, which I will use in future LPODs, have an elegant and noble feel; image what abominations there might be if we named these features today!

Technical Details:
13 April 2006. TOA 130 at 750mm focal length + Infinity 2-2 CCD camera. Mosaic of 2 images. This is the same image as yesterday, but turned upside down to match the telescopic view and keep you alert!