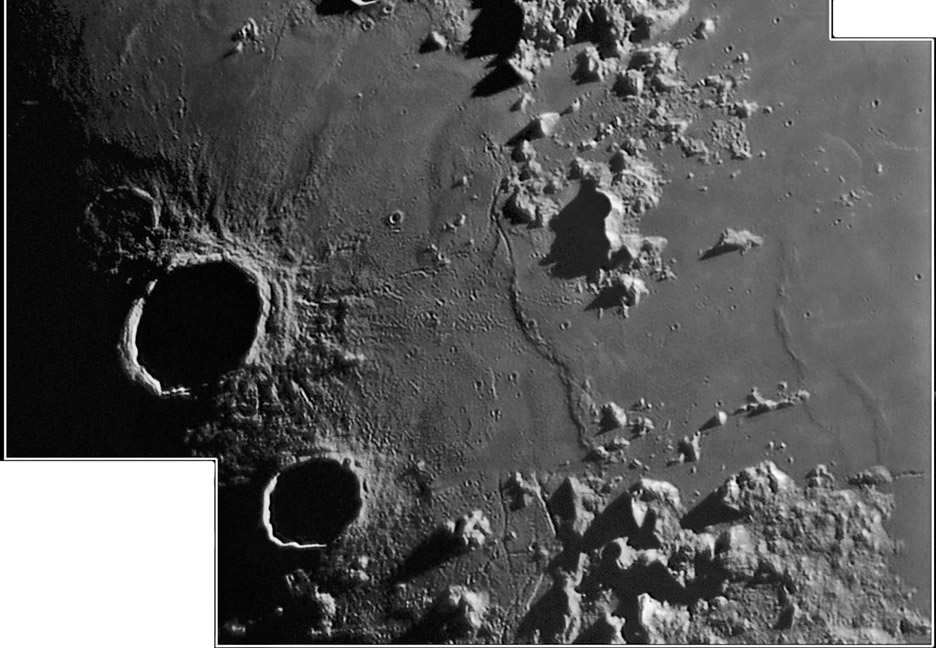 Gilbralter is a small knob of mainland Europe that sticks out into the passage between the Mediterranean and the Atlantic, and yet the entire strait is named for it. Thus it seems reasonable that the gap in mountains that allows lavas from maria Imbrium and Serenitatis to meet be named the Straits of Fresnel, which is the leftmost headland of the Apennine Mountains (bottom right). The exact nature of the mountain gap that allows the existence of the strait is unknown, but Paolo’s magnificent image provides some clues for speculation. The northern end of the Apennines is relatively straight - as if the mountain’s northward continuation has been sheared off. The parallel linear mountains east of the strait midpoint - Caucasus Alpha (north range) and Fresnel Theta (south range) - seem to mark the sides of the gap. Evidence for a discontinuity is provided by the truncation of the Fresnel Rilles to the south and the Theaetetus Rilles to the north of the strait. I guess that they are part of a previously continuous rille system whose middle has disappeared. Did a 60 km wide swath of mountains now occuppied by the strait sink? Is the Strait of Fresnel a wider version of the Alpine Valley? Is the giant gap in the Imbrium rim ring between the west end of the Carpathians and the Gruithuisen domes a larger version of these gaps?

Chuck Wood
This is a classic LPOD from July 9, 2007; More image submissions are needed!

Related Links
Rükl plates 12, 13, 22& 23 (smack in the middle of a 4-corner intersection)
Paolo's website
The amazing telescope used for this image.