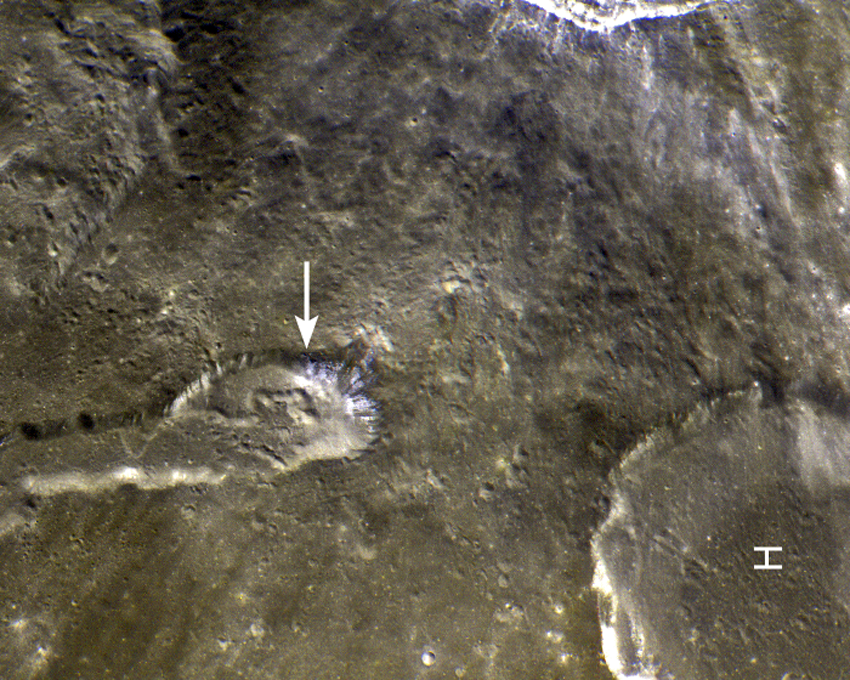 This is the first released LRO Wide Angle Camera (WAC) image in color. It shows the Cobra Head on the Aristarchus Plateau, with bright rays radiating from the crater, whose rim is just visible at the top right. I enlarged and rotated the image published by the LRO team so that north is to the left, making the H marking Herodotus lie on its side. The rotation was to make it easier to see the shape and rim of the Cobra Head. But first look at the exposed wall of Herodotus. You can see the top unit is dark, like the surrounding surface, presumably dark pyroclastic material (ash) that erupted from the Cobra Head and that covers the Plateau. Under the top dark layer is a very distinctive thin bright layer, with a wide dark layer below. Back at the Cobra Head the bright layer seems to be thicker, or perhaps it simply slid downslope, as suggested by the deposit of the Head's floor. A LRO Narrow Angle Camera (NAC) image of the area pointed out by the arrow shows closeup views of the bouldery bright material. I am not sure what it is. It is not bright ray material from Aristarchus because that crater is about 2.5 billion years younger than the dark pyroclastic material on top, and ray material from Aristarchus dusts the ash. It could be nearly pure anorthosite, but that would suggest that the Aristarchus Plateau is not made of basalt, as generally believed, but is an uplift of basement rock from below the depth of the the surrounding mare basalts. However, the fact that the bright layer is thin might imply that it is a dusting of bright ejecta (from where?) that is on top of mare material. The weasel words, "could be", "suggest", and "implies" means that we really need more information to make a convincing interpretation. Perhaps a compelling understanding will emerge when LRO images the entire Plateau (with both NAC and WAC) and multi-spectral mapping distinguishes compositions.