Difference between revisions of "March 7, 2020" 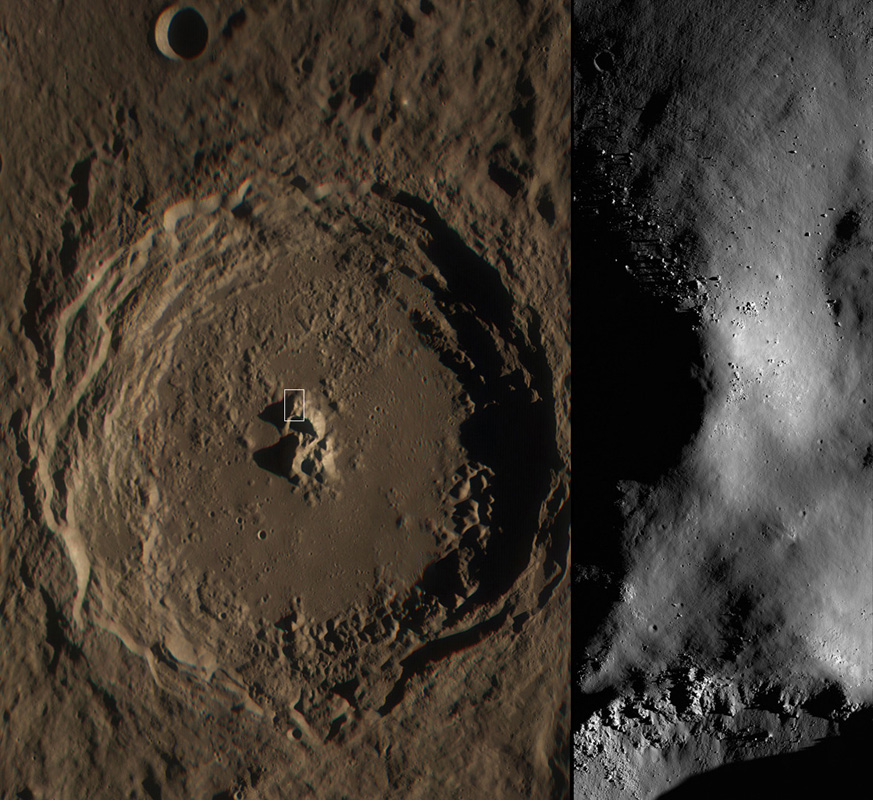 The above image is a color WAC image mosaic of Langrenus. Though being taken by the LRO robotic spacecraft, I wondered how astronauts would describe the crater from the vantage point of lunar orbit. So I looked up the transcripts and found the following first person accounts of seeing Langrenus on-location. On Apollo 8 crew James Lovell had this to report:
CMP- Lovell: .... Langrenus is quite a huge crater; it's got a central cone to it. The walls of the crater are terraced, about six or seven different terraces on the way down.
On the second landing mission of Apollo 12 crew of Conrad, Bean and Gordon had perhaps the best observations, and had this to say:
CDR (Pete Conrad): I'm going to hand it over to Dick (Gordon). He's got Langrenus out the window.
CapCom: Okay. Very good.
LMP (Alan Bean): Dick's got the camera. He's pointing it over toward Langrenus now.
LMP: It's got high peaks in the middle.
CDR: ... there's the central peaks right in Langrenus right there. - -
CDR: I can see those pretty well.
CDR: The - mountain that's sort of ... sort of in the center of Langrenus I'm looking at through the monocular, and apparently, they look very smooth with the naked eye, but by looking through the monocular, I can pick up these black dots. They're very black, and I - They're obviously very large boulders sitting that are around on it.
CapCom: - - of the central peak - it looked kind of - It appeared to be rather rounded?
CDR: Yes. It appears to be rounded, but it's got a lot of big boulders sitting on it.
In the right hand image above, an NAC image, boulders can be seen on the central peak, possibly the same ones observed by Pete Conrad with the monocular telescope!
On the historic Apollo 11 mission, the crew of Armstrong, Aldrin and Collins brought in a little background on Langrenus and had this to report:
LMP: Aldrin: We're moving the camera over to the right window now to give you Langrenus, its - its several central peaks and -
CapCom: Roger. We got Langrenus in our screen now. We're getting a beautiful picture of Langrenus now with its rather conspicuous central peak.
CMP: Collins: The Sea of Fertility doesn't look very fertile to me. I don't know who named it.
CDR: Armstrong: Well, it may have been named by a gentleman whom this crater was named after, Langrenus. Langrenus was a cartographer to the King of Spain and made one of the - one of the early reasonably accurate maps of the Moon.
CapCom: Roger. That's very interesting - -