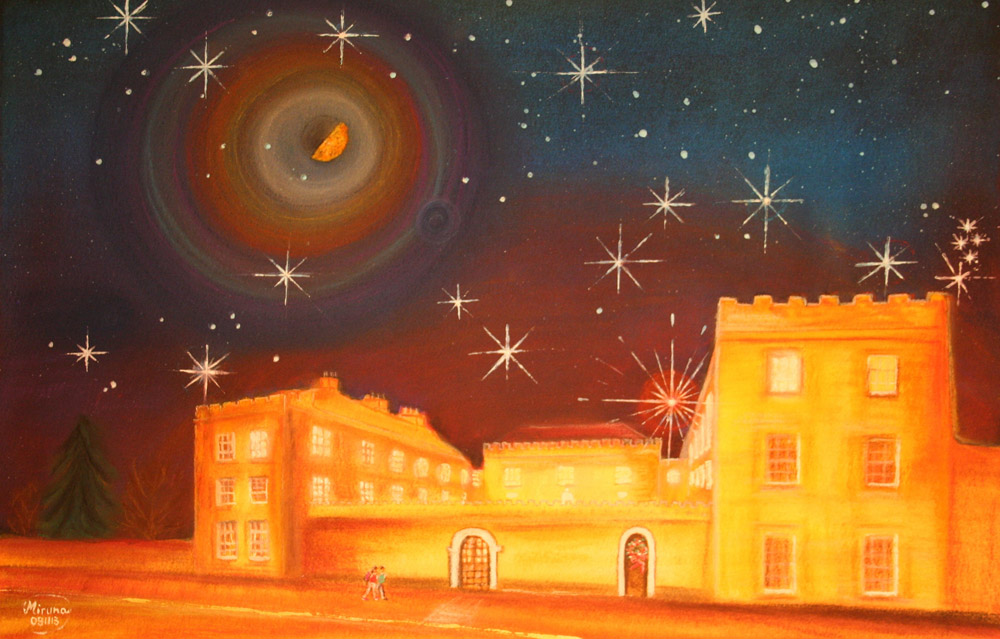 This painting depicts the southern sky on 24 December 2009 at 5.:30 pm, when the Moon’s phase reaches first quarter. The next brightest celestial object at this time is the planet Jupiter, which this year is the "Christmas Star" for the Royal School, Armagh, Ireland. Jupiter is seen here just before it disappears behind the school. The painting shows stars in Pisces, Pegasus, Aquarius and other constellations, and the location of the planet Uranus (visible through a telescope) about a third of the way from the Moon to Jupiter. Uranus was found in 1781 (seven years after the old building of the Royal School was completed) by the astronomer and musician William Herschel, the discovery constituting the first identification of a planet since ancient times and earning Herschel the post of King’s astronomer from George III. In 1609, the year after the founding of the Royal School, Galileo Galilei used an early telescope to observe the Moon and discover satellites of Jupiter. To mark the 400th anniversary of Galileo’s first use of the telescope to observe the sky, 2009 has been celebrated worldwide as the International Year of Astronomy.

Miruna Popescu
Dr Miruna Popescu, born in Romania and at Armagh Observatory since 2002, is the coordinator for the International Year of Astronomy 2009 in Ireland.