Difference between revisions of "March 4, 2020" 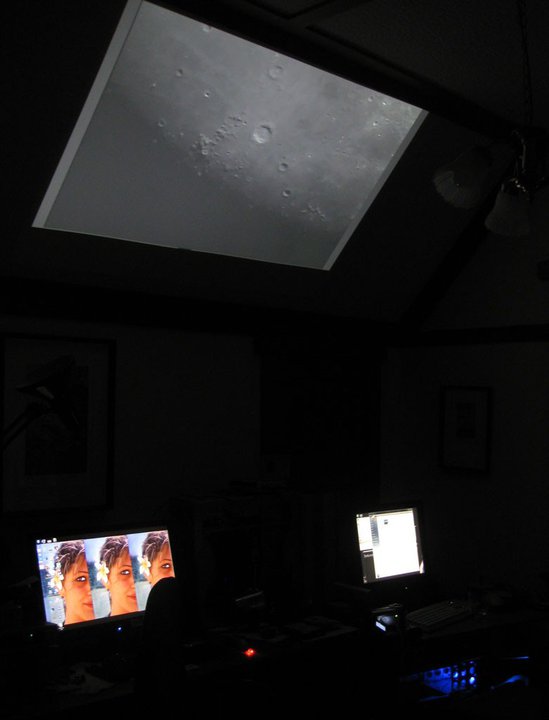 This image from my Facebook friend Paul Moss caught my attention as being a very cool setup for International Observe the Moon Night (InOMN) in New Zealand (Aotearoa).

Paul wrote: "This is the re-streaming facility that I set up for InOMN, to share various webcasts back to other networks. The moon image overhead was being streamed live from Australia, recieved by me on my main computer, and sent to the projector. Then a camcorder that was connected to a laptop was streaming that feed back out on my channel, to enable the Australians to see the entire circuit of their video, which gave them a better feeling for what they were doing. The display screen to the left shows its desktop because its second screen is in fact the video projector, hidden from view in this photo. The screen to the right is another computer, processing a rising moon video that I had streamed and captured earlier, which was inserted into my broadcast while the cloud cover was stopping the live stream. The laptop sending out that overhead projected visual is behind us in the photo. Another laptop is in the other room and is hooked up to a camera aimed at the moon, waiting on the clouds. We broadcast from New Zealand under the name of ‘Astronomy Aotearoa’ and we were not only able to send the live moon from here in Wellington, New Zealand, but we also re-streamed the moon from various sites around the world, mostly from Snake Valley in Victoria, Australia, but also from Adelaide, Perth, and later from Florida, Toronto, Griffith Park, California. It was a huge sharing of common interest, with many visitors arriving and seeing an astronomical view for the first time ever, from news sites that were reporting the global event. There were also dozens perhaps hundreds of celebration events worldwide."

The InOMN here in New Zealand was hampered by a large storm the size of Australia lashing the country. However events like Paul Moss's and also the "Levin Stargazers" run by Mike White of Levin, NZ, were very successful events. I also was able to image the Moon on the InOMN in a small ten minute gap in the weather.

Technical Details
Image on overhead screen is of the Copernicus and Eratosthenes region at around 12:00 UT on September 18, 2010.