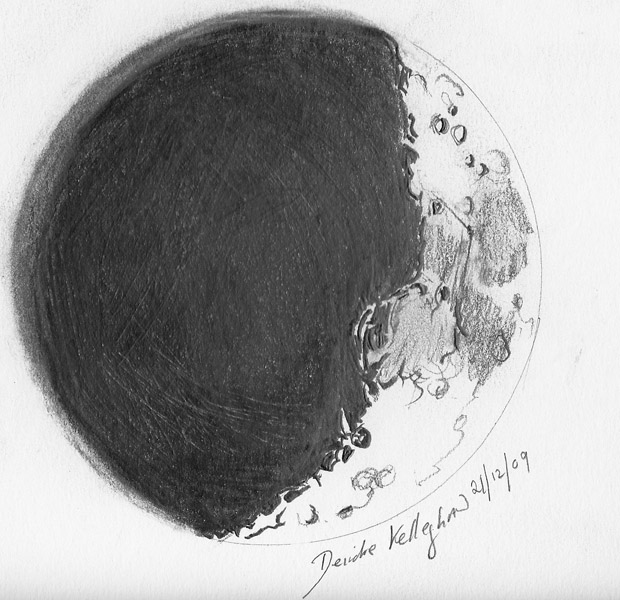 It was a roughly similar view 400 years ago when Galileo first pointed his telescope at the Moon. Like Deirdre he sketched a few of the main features to indicate the general roughness and character of the surface. Deirdre's telescope is immensely superior to Galileo's homemade optik tube but she too chose only a symbolic representation, probably being overwhelmed by the prospect of trying to draw everything that was visible. Both her drawing and his 400 years earlier included a large circular basin, but strangly Galileo didn't comment much about the largest feature he depicted. And that myopia persisted until the 1890s when Gilbert first recognized that many maria occupied giant craters. But his discovery was neglected until 1949 when Baldwin independently discovered the basins that contain maria. And again no one took notice until about the mid-1960s when Hartmann and Kuiper discovered many circular basins and the USGS started mapping their ejecta deposits as stratigraphic markers. Why is it that we overlook the biggest objects?

Technical Details
Dec 21st '09; 17:30 UT - 18:15 UT. 200 mm reflector, 26mm eyepiece, FL1200 mm. Pencil rotated. Seeing 2 , Lunation 5.23 days. 0°C.
10:15 AM; Deirdre added this info: I would have liked to do a pastel drawing of the Solstice Crescent Moon but it was too cold. To shorten my drawing time I choose to use pencils. The diameter was determined by a cereal bowl, approx 4 inches. The wonderful Mare Nectaris, was one of the best defined areas. Fracastorius showed its horseshoe edging out of the terminator. Piccolomini's central mountain was wrapped in shadows which created its circular shape. Seeing was not so good, Earthshine was just visible but no details stood out in the dark body of the Solstice Moon as one would expect.