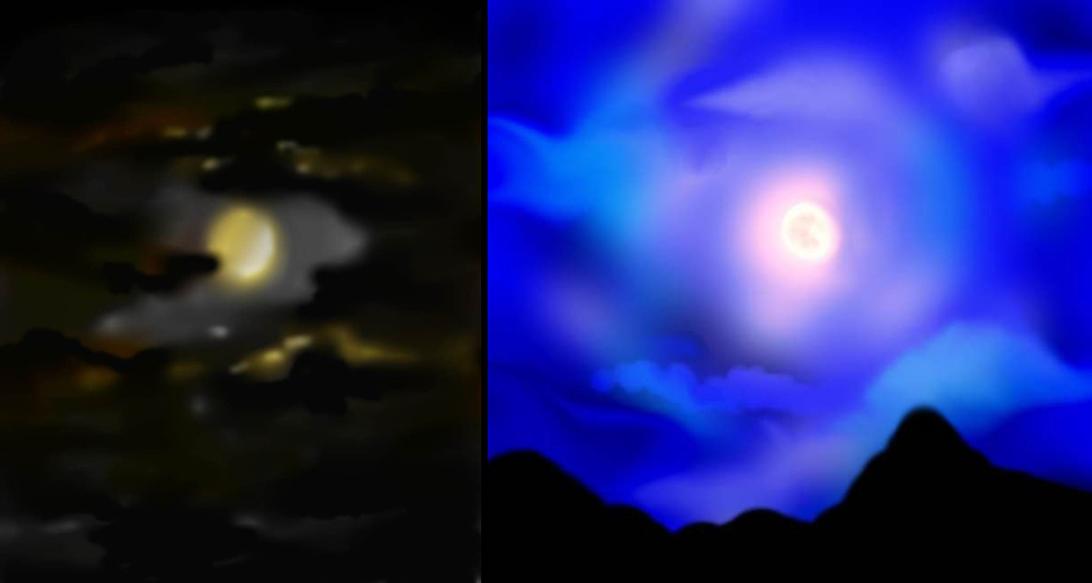 Vincent van Gogh made the famous painting "Starry Night", and in todays age we have some equally moving paintings by Peter Grego of Cornwall, UK, of "Moonlit Nights". Peter made these wonderful computer paintings on his PDA on a mostly cloudy InOMN on September 18 (left image) and again on September 26 (right image). The "atmosphere" of the moving paintings and the glow around the Moon in them, got me thinking about another kind of atmosphere - the lunar atmosphere. True, the Moon exists in the vacuum of space, but the gravity of the Moon though weak can still hold onto some atoms near the surface. The recently detected hydroxyl or water molecules for one, and the heavier inert gases such as Helium, Radon and Argon deteced by the Apollo experiments. The Apollo 17 LACE experiment detected about 10^7 particles/cm^3 by lunar day, and dropping to 10^5 particles/cm^3 by lunar night. Still better than the best vacuum on Earth but still detectable. A sodium tail was also detected streaming away from the Moon after the Leonid meteor shower of 1998. The Sodium was produced by impacts sputtering the atoms loose from the lunar soil, which are then swept away from the Moon by the solar winds magnetic field. This is known as a surface-boundary-exosphere where the atoms don't collide, they just move in trajectories back to the surface or escape the Moon with help from the solar wind. The lunar surface sure would be a great place for setting up a telescope, no clouds to contend with on International Observe the Earth Night there!

Technical Details
Sketch on left: Naked eye view for International Observe the Moon night 2010 September 18, 21:30UT Cloudy, Moon hazy, phase visible.
Sketch on right: Moonrise over Clay Mountains. "The centre of Cornwall in southwestern England is known as 'Clay Country'. For hundreds of years decayed granite has been blasted out of the landscape by high pressure water hoses and the Kaolin (China Clay) settled out and dried. This has left huge hollows in the ground surrounded by pyramidal 'mountains' of excavated material. St Dennis is surrounded by these impressive man-made features. Last night the waning gibbous Moon was observed rising between two of these pyramids, known affectionately as 'Flatty and Pointy' since the 1930s." Peter Grego.

Yesterday's LPOD: In the Thick of It

Tomorrow's LPOD: King for a Day