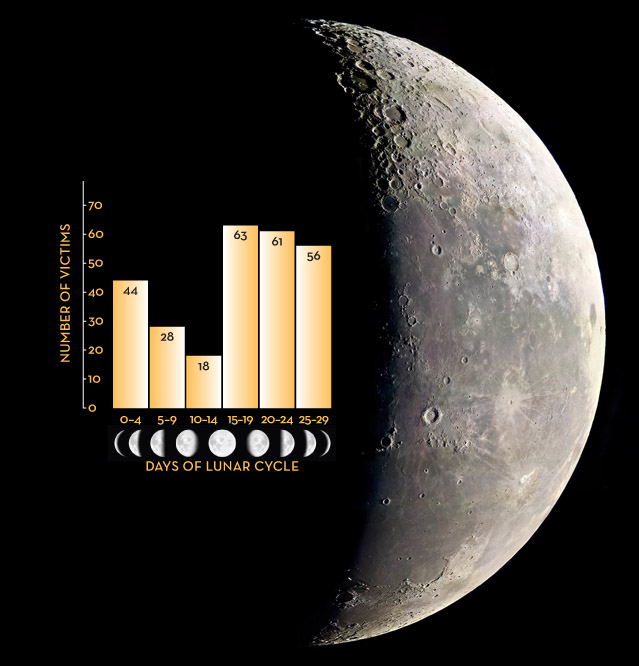 graph from Univ. of Minnesota, and right image from Igor Pankratov

Lion is the name of the new Apple operating system, but more viscerally it is one of the most dangerous animals in Africa. On my first camp out when I was in the Peace Corps in Kenya I was awakened in the middle of the night by a very loud roar of a lion. My friend and I quickly jumped out of the tent and spent the rest of the night in his Volkswagen Bug. Lions are frightening and in one part of Tanzania they attacked 474 humans over 20 years. Now a study provides statistical evidence that the success of lions in hunting humans depends on the phase of the Moon. Researchers from the University of Minnesota found that human attacks and fatalities peaked in the nights after full Moon. This makes sense because there are no strreet lights in upcountry Tanzania but people still have to go outside at night. When the Moon is full there is good illumination all night and lions have a hard time hunting. But each night after full the Moon rises 50 minutes later so that the early part of the night becomes darker and less safe. And that is when lions strike. VWs are really unconfortable but much safer than being in a tent.

Chuck Wood
Remind me to tell you sometime of when an elephant nibbled the bush our tent was anchored to...

Technical Details
08.28.2005. 110mm Newtonian reflector TAL-1 and SONY CCD TR-506E
Be sure to look at the full size image from a magical little Russian telescope!