From LPOD
(Redirected from Main Page)
Jump to: navigation, search 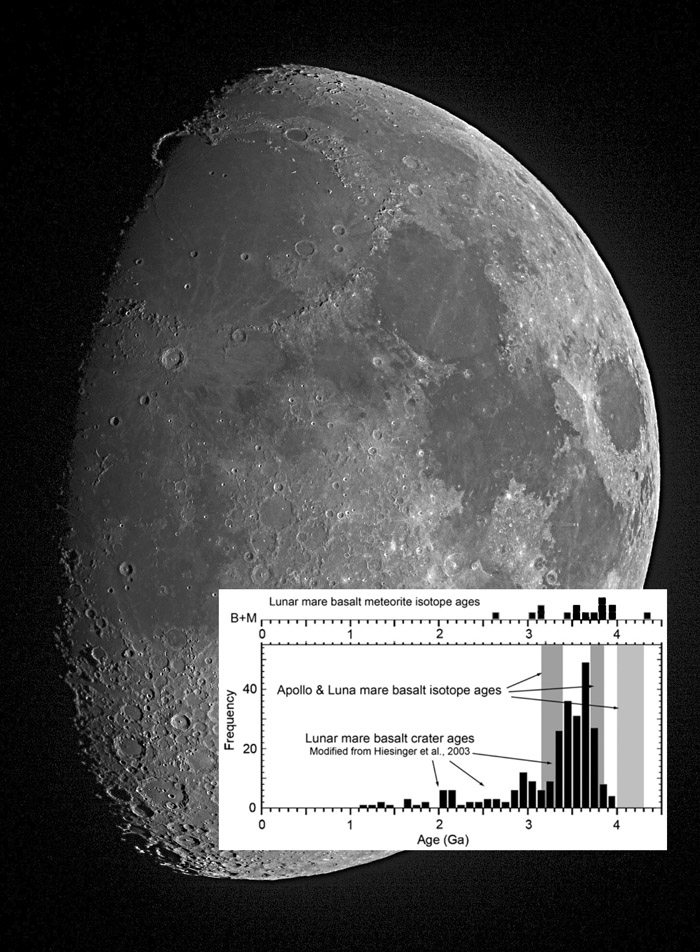 Moon image from unidentified contributor, and graphic insert from Basilevsky, Neukum and Nyquist (2010)

How do we know the ages of lunar maria? One way is to count the number of impact craters, but calibrating those crater counts to absolute ages requires some maria of known age. The fundamental information about maria ages has come from the radiometric dating of mare basalts collected during the Apollo and Luna missions. A recent paper by my colleagues Sasha Basilevsky, Gerhard Neukum and Larry Nyquist has compared the crater counting and Apollo sample ages with another growing source of lunar rocks - meteorites. So far, about 115 lunar meteorites have been recovered, but they probably represent only about 63 individual rock - some were fragmented in space or on reaching Earth. Some of these are highland rocks, some are mare basalts, and some rocks are mixtures of the other two types. By just looking at mare basalts, Sasha and friends found the ages of 15 samples, that may have come from mare material anywhere on the Moon - in this sense they are random samples likely to be from places unsampled by space missions. The chart shows that the three sources of information about mare ages are relatively consistent. Mare lavas erupted to the lunar surface between about 4.3 and 1.1 billion years ago, with most being between 3.7 and 3.3 billion years. Interestingly, the spacecraft samples include basalts older than any area dated by crater counting. These older rocks are usually small fragments inside the mixed samples. The older mare material may have been covered by younger lavas and may no longer be at the surface, or are cryptomaria covered by bright rays and ejecta..

Technical Details
I am sorry I have once again disconnected an image from the submitter. If this is your image - it is labelled OSMoon140111s.jpg - please let me know who you are. And thanks for the nice image!

Related Links
Basilevsky, Neukum and Nyquist (2010) The spatial and temporal distribution of lunar mare basalts as deduced from analysis of data for lunar meteorites.. Planetary and Space Science 58 1900–1905.