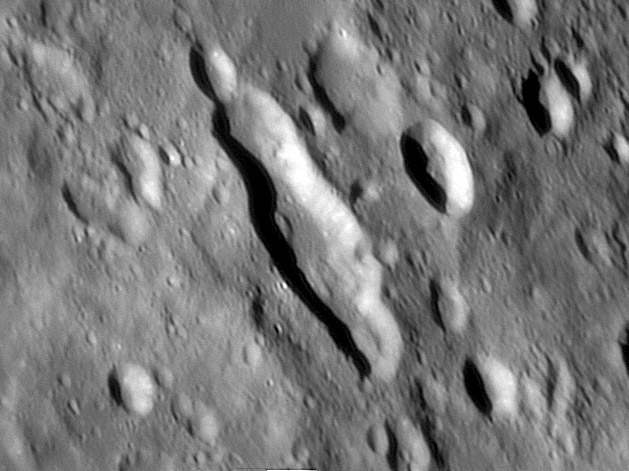 south up image by Damian Peach

Famous craters are always observed, but the Moon has thousands of fascinating other features worth seeking out. One of the most bizarre looking crateriforms is Rheita E, a slot-like depression north of the Rheita Valley. Rheita E (66 by 32 km) appears to be made of three overlapping craters which probably formed simultaneously since there are no walls between them. Somewhat similar intersecting crater chains make up parts of the Rheita Valley. Because the Rheita Valley is radial to Mare Nectaris it is widely interpreted as a secondary crater chain made by ejecta during the formation of that basin. This encourages the speculation that Rheita E is also a basin secondary crater chain. The only problem is that E is not radial to anything except the southern end of Mare Fecunditatis or perhaps the Balmer basin. But both of these are very ancient basins with little topographic expression; it seems inconceivable that the relatively sharp-rimmed Rheita E could be related to them. So what is it? A chance triple impact? The Schiller of the south-east quadrant? Whoever provides the best explanation receives a free subscription to LPOD!