Do You Belong in a Zoo? 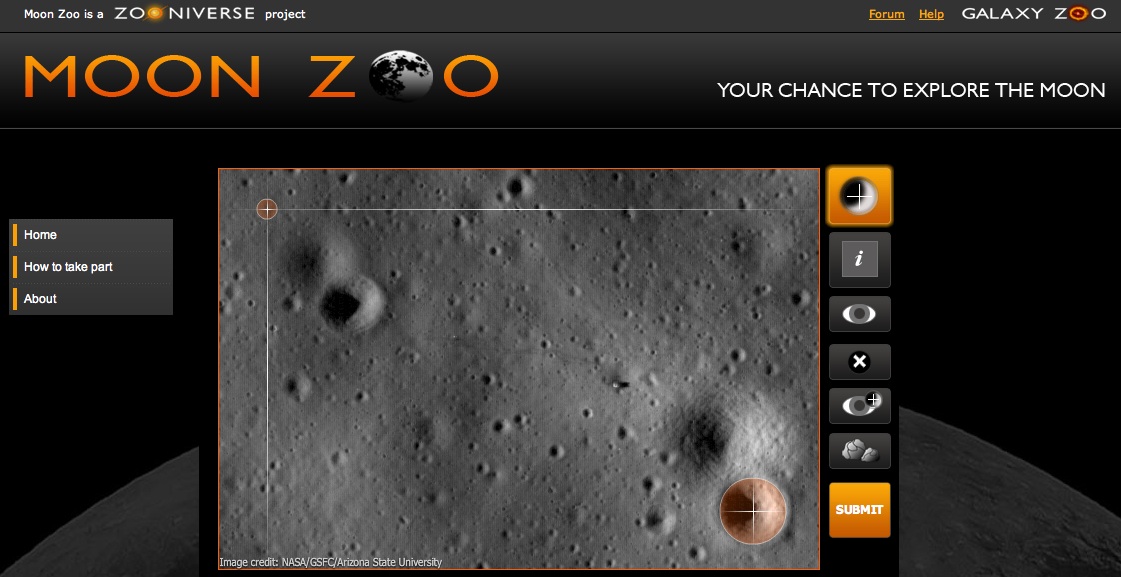 If you became addicted to Galaxy Zoo you will love Moon Zoo. Both of these zoos are websites where citizens of the web identify, classify or measure objects too numerous for paid researchers to handle, and too visually complex for machine algorithms to process correctly. More than a hundred thousand normal people have classified faint galaxies in Galaxy Zoo, collecting data that was used in scientific publications and even discovering new phenomena. Moon Zoo is an experiment where the outcome is less certain. Craters are identified and measured on high resolution LRO images. In the image above I have used the measuring tool on just two of the many craters available in this beta version. And if you look closely you will detect a spacecraft - Apollo 14 - that can be marked as an interesting. Like Galaxy Zoo, the lunar one has a forum to build a sense of community by sharing experiences and knowledge - and there is even a thread for LPOD. It is possible that the number of LRO images is too great for scientists on the team to look at every one; if so, you may be the first person on Earth to see some parts of the lunar surface. I doubt if you will find a monolith or alien bases, but you will have the pleasure of helping understand our cosmic companion.

Unrelated Note
LPOD was going to feature Monday's release of vast amounts of LRO data, but the access and display is via the PDS system, which is too complex for normal mortals to understand. Perhaps a clever LPOD user will prepare a dummy's guide to help share the hidden treasures.

Tomorrow's LPOD: The End of Secrets