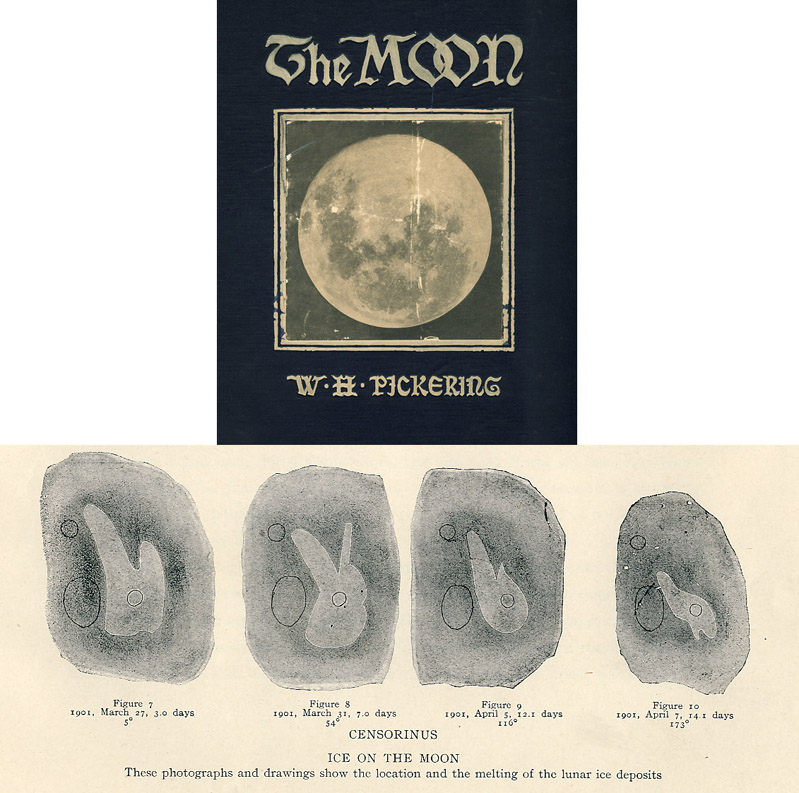 Recently I had a chance to acquire a copy of Pickering's 1904 opus, The Moon - A Summary of the Existing Knowledge of our Satellite, with a Complete Photographic Atlas. This was one of the earliest photographic atlases of the Moon and was the first to superpose a latitude-longitude grid. Pickering is remembered today for his interpretations of changes in brightness of craters as evidence for ice, vegetation and insects - in other words, as a crank. Because of the lack of reliable methods to measure temperature, astronomers 100 years ago thought the Moon was below freezing, the 14 days of solar heat being radiated quickly into space. And Pickering convinced himself that the Moon had a very tenuous atmosphere. So with some air and temperatures too cold for gases to escape, it was perhaps permissible to speculate that ice (or more likely hoar-frost) might go through monthly cycles of deposition and evaporation. The drawings (do they look more like teeth or bunnies?) of the changing size and shape of the bright region surrounding the small crater Censorinus (above) was regarded by Pickering as compelling evidence for ice. He also regarded crater rays as ice in crevices, and thus visible only when the Sun was high enough to shine into the cracks. The bright southern cratered hemisphere was interpreted as a huge expanse of ice. With the accurate measurement of the very high temperature of the lunar surface, and increasing evidence that the Moon had no atmosphere, Pickering's arguments collapsed. But like a true believer he did not let them go, but passed them on to Walter Haas (who observed with him in Jamaica) and indirectly Virgil Firsoff. Let's hope the modern detection of lunar ice withstands new evidence better than Pickering's arguments did.

Technical Details
The best telling of the Pickering story is in "The Madman of Mandeville" chapter of Epic Moon by Sheehan & Dobbins.