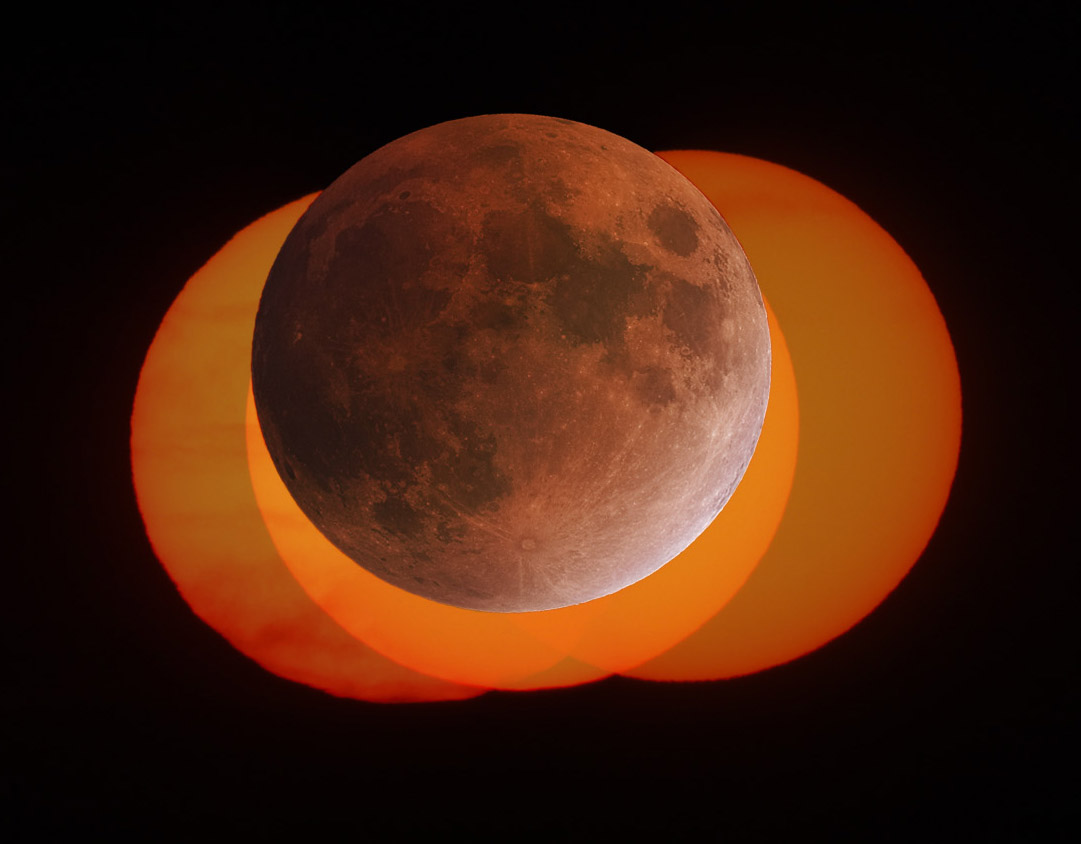 During the recent partial solar eclipse I made a composite of 3 shots (see below) taken through a telescope that together made up the outline of the new Moon. I wondered if it would be possible to find a picture of the full moon that would perfectly match the hole so I downloaded libration tables for every day since 2005 and found that on the 21st of february 2008 the Moon had a very similar libration. And to my big astonishment I remembered that there was a beautiful eclipse of the Moon on that very day! I turned to a friend who is very knowlegeable about the Moon's motion to understand if this was an extreme coincidence or part of a cycle. Well his explanations were a little beyond my understanding but in conclusion it seems to be the latter. To match 2 opposite eclipses, one of the sun and one of the moon while maintaining the same libration, a period of approximately 3 years is required.

I then had to find a picture of the eclipsed moon of the 21st of February 2008. As it was widely photographed (but not by me) I remembered having seen a beautiful shot on Johannes Schedler's site. He gave me permission to use his picture in my composition. So I have now completed the missing face of the Moon by using an eclipsed Moon from 3 years ago, thus producing a double eclipse, only possible in the digital world. 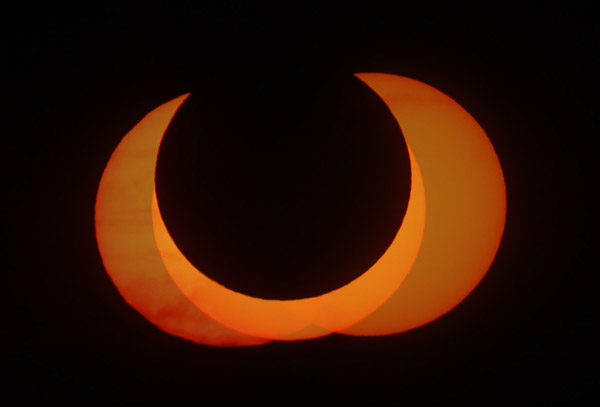 Technical Details
Solar images: The eclipse of the sun started before sunrise but the sun did not emerge from behind the clouds until 8h16 UT. The 3 composited pictures of the eclipse make up a portrait of the transiting moon. Not much is missing. The first picture was taken at 8h23' UT, the second shows the crescent at the maximum of 85% at 8h41', just a little bellow the theoretical maximum of 86% visible in the north of Sweden. The 3rd picture was taken at 9h07' UT just before the clouds started coming back and completely obstructed the view a little later. I used a William Optics FLT-110 at f/6,5 with a solar filter and also a Canon Eos-40D for the eclipsed sun. To get the correct orientation of the moon, I made a simulation using Starry Night Pro Plus version 6.4.1. In making this composite I had to flatten the Moon to compensate for the atmospheric refraction of the low altitude sun, only 3.3° versus 18° for the eclipsed Moon.
Lunar eclipse image: Feb 21, 2008. TEC-140 with TEC flattener at f/7. Canon 40D: 4 x 3 sec at ISO 200 for eclipsed Moon.

Tomorrow's LPOD: The Moon is Dead