Way Around the Limb 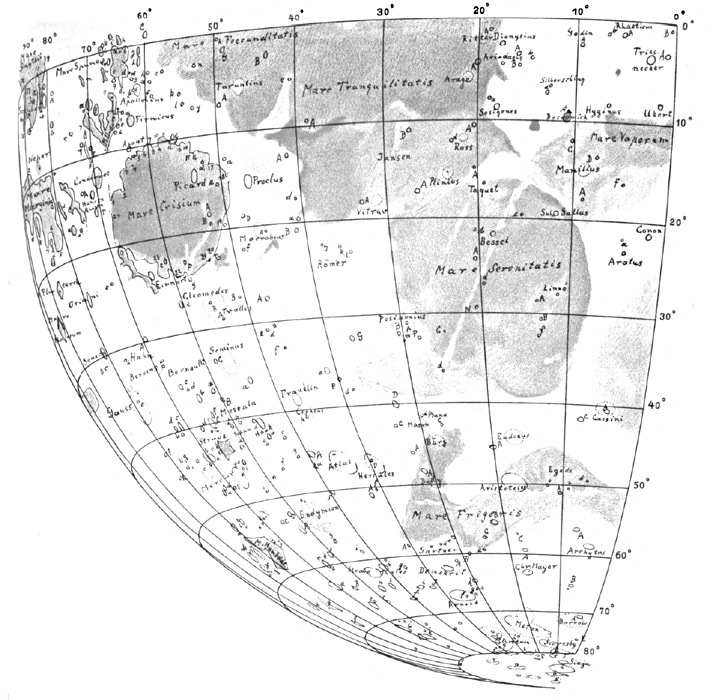 We celebrate Moon mappers who have drawn the classic collectible maps, Riccioli, Schmidt, Goodacre and even Fauth, but ignore the map makers whose work made ever more accurate maps possible: Meyer, Mädler, Saunder and Franz. Mädler, of course, is the most famous mapper of the first half of the 19th century, but what he also did, in common with the other three, was to measure and accurately determine the positions of hundreds of craters and peaks. These landmarks defined a skeleton map that all other craters and mountains could be added to by estimating their position relative to the measured points. By the beginning of the 20th century the German astronomer Julius Franz recognized that existing maps of the limb regions were awful because there were too few control points there. His Die Randlandschaften des Mondes(The Marginal Landscapes of the Moon), published in 1913, the year he died, was essentially a list of limb features that Franz had measured the positions of on photographs from Lick and Paris observatories. The locations of these measured points were plotted on four quadrant maps, that were presented with 10° libration in both axis to open up the limb. Franz gave letter designations to all the small craters he measured and 16 new names, mostly to mare patches near the limb. All four of Franz's maps are now available at the Moon Wiki.

Tomorrow's LPOD: Almost On the Ground with Apollo 15