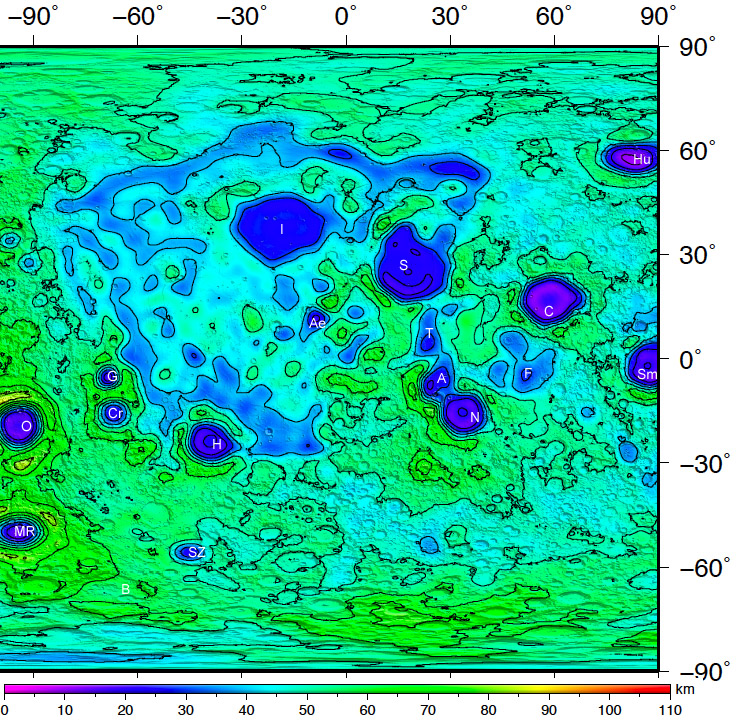 Some animals can see radiation beyond the range of human vision, but what if you could see gravity? Spacecraft orbiting the Moon feel gravity, being pulled closer to the surface where there are subsurface mass concentrations (mascons), and escaping slightly from it where mass is lower than average. Using data from Apollo, topo maps and various assumptions, geophysicists convert gravity differences into the more easily understood crustal thickness variations. Kaguya has provided the best mapping of gravity, and excellent topography, and thus the recent Kaguya crustal thickness maps are the best ever. In this nearside half of a global crustal thickness map I have identified various impact basins by use of their first letter. Impact basins were originally defined by their morphology - they were big, circular, had multiple concentric rings, and often were surrounded by massive ejecta deposits. Most nearside basins contain mare lavas whose surfaces are below the average lunar radius. Earlier crustal thickness maps showed that basins had thin crusts, caused both by the excavation/removal of surface rocks and by a rise of the lunar mantle under them. The new Kaguya map confirms the crustal thinning of nearside basins, except for Bailly (B) and Marginis (no M, but above Smythii - Sm). Fecundiatitis and Tranquilliatis have small amounts of thinning - about the same as Sinus Asperitatis (A) which is not usually recognized as a basin. Sinus Aesteuum (Ae), east of Copernicus, has thinned the crust more than some basins. And the Cruger (Cr) Basin is totally without any surface features except for anomalous patches of maria. Finally note the mostly connected string of crustal thinning from Frigoris, around the western edge of Procellarum, and extending to Nubium. This outlines the putative Procellarum Basin and the PKT terrain - hmm.

Tomorrow's LPOD: A Matter of Time