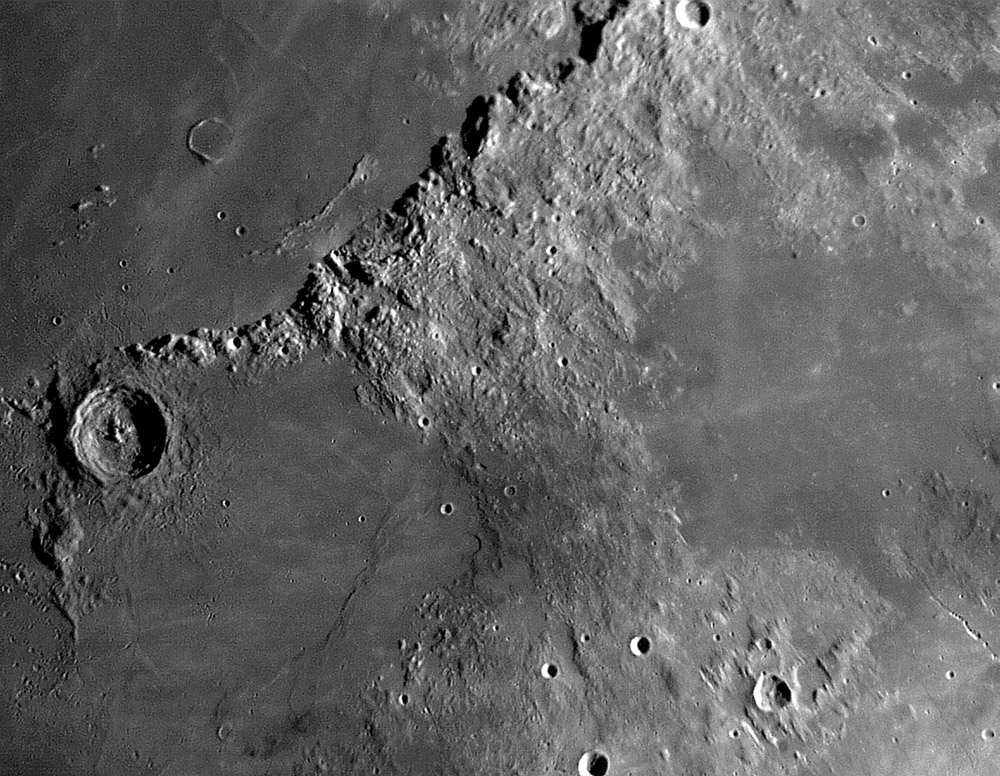 June 1, a new month and a completely empty calendar of LPODs to fill. The beginning of the month is the hardest time psychologically because of the empty 30 days looming, typically with no reserve of images. But Ricardo is a faithful submitter of his famous one frame only images and I randomly selected a recent one with one question, why? Why are lunar landforms where they are, and look the way they do? For Eratosthenes and other primary impact craters in the image, to a first order, their locations are random, based on the what part of the Moon happened to be facing the trajectory of an incoming projectile. But we saw earlier that the locations of impact craters are not completely random for there is an excess on the leading hemisphere of the Moon as it moves in its orbit. For secondary craters like those southeast of Eratosthenes and east of the unseen Copernicus, the locations and even the shapes are tied to their primaries - more near the source and often clustered with a rough alignments pointing back to the primary. Of course, for basin secondaries the distances from the primary, and the large size make their identification less certain, although the elongated mare ponds at top right and the similar older interconnected craters near Ukert are good candidates. A mystery is what is the roughly radial circle of ridges near the center of the frame. This is immediately above the ill-defined crater Marco Polo. To the southeast of Marco Polo the Apennine ejecta is disrupted and islands of it stick up in western Mare Vaporum. On Earth Marco Polo would probably be a collapsed volcanic caldera and the hills on Vaporum might be debris from the collapsed caldera rim. But on the Moon, probably Marco Polo is a pre-existing impact crater partially buried under basin ejecta, The Vaporum hills would be distal parts of the basin ejecta surrounded by later lavas. Finally, another why question. Why is the Bode pyroclastic deposit - one of the biggest on the Moon - located where it is? Many small pyroclastic units are in floor-fractured craters, and the Aristarchus Plateau veneer of yellowish ash is associated with voluminous lava eruptions through Schröter's Valley, but what controlled the emplacement of the dark Bode ashes?