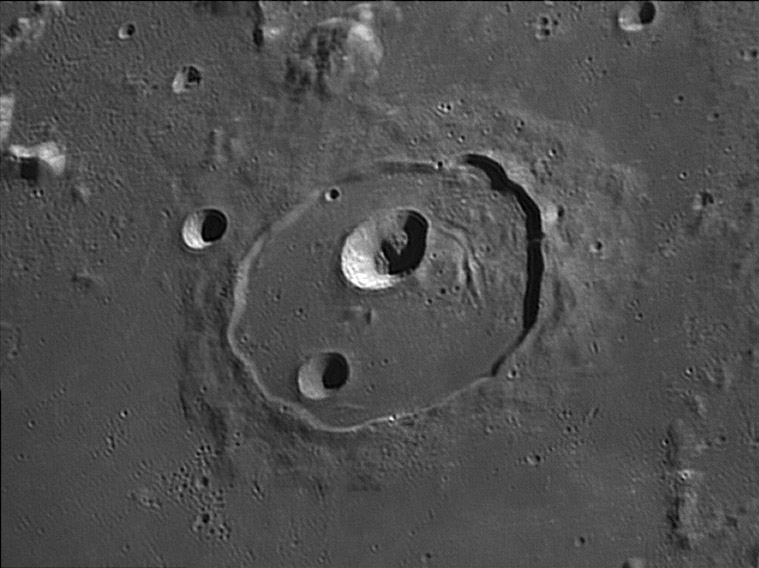 This image speaks for itself. Elger pointed out that Cassini is similar in character to Posidonius and he was right. Each crater has a low wall and is filled with a broad smooth floor. But there the similarities end, for Posidonius was radically transformed by the magma that invaded its underlying faults, lifted and tilted its floor, and snaked across the surface as a super sinuous rille. Posidonius is a classic floor-fractured crater. Cassini, like nearby Plato and Archimedes, had mare lava seep up its faults and quietly flood its floor but was not strongly affected. Or maybe it was. Possibly the elevated and rilled portion of the floor on the right is evidence of uplift and floor-fracturing. The large "washbowl" crater does look tilted, and maybe the higher elevation of the right side of its floor is due to the uplift. So perhaps Elger was more right than he knew - or I did - for just as only one side of Posidonius was uplifted, so was just one side of Cassini. It makes a good story - wonder if it's true?

Chuck Wood
The original version of this LPOD had no identification of the imager. Thanks to Sam Whitby for identifying the image as one of Damian's.
Tuesday pm update: I am surprised there have been no comments on this LPOD because it is an explanation for a famous crater. What do you think of it?

Tomorrow's LPOD: How We All Started