A Question of Paternity 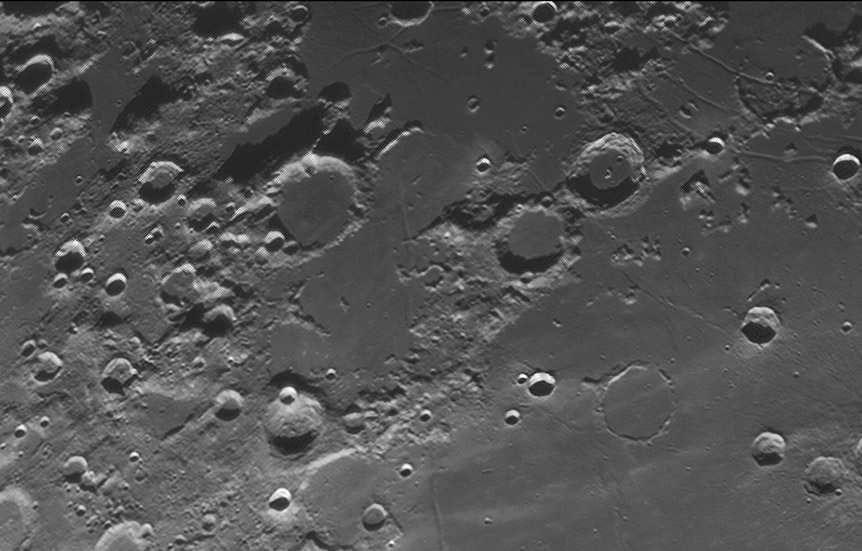 Pepe sent a nice long mosaic on which I found a feature of interest shown in the extract above. What do you think caught my interest? Its not the Kies Pi dome, nor the one inside Capuanus. It is one of the rilles, but which and why? After ypu look at the image a bit, and maybe take another sip of morning coffee I'll tell you. It is the Hesioudus Rille, which goes from the bottom of the image westward (toward the top) to the long diagonal ridge that stretches between Cichus and Mercator. The ridge is called the Mercator Scarp, and it is generally considered to be a portion of the rim of the Nubium Basin. The Hesiodus Rille continues on the west side of the scarp, crossing Palus Epidemiarum. Lunar Orbiter images and the new LRO-WAC mosaic show that, in fact, the rille cuts thru the scarp. My question is why does this rille exist? It is not concentric to the Nubium Basin, as the nearby Harpalus RIlles (upper right) are to Humorum. It is about tangent to the Humorum Basin, and extending hundreds of kilometers to the west, it is roughly radial to the Mendel-Rydberg Basin. Do any of these geometric relations to basins matter? Yes. As mentioned above, some rilles are concentric to basins and owe their origins to edge fracturing due to subsidence of the basin center. Other rilles seem to be radial to basins - for example, the Sirsalis Rille and others are radial to the putative Procellarum Basin. Radial rilles tend to be much closer to their basins than the Hesiodus Rille is to the M-R Basin, but we have no other suggested explanation for the rille, so for tonight that seems to be the best, but far-fetched, explanation. Finally, I think this is Pepe's first LPOD - congratulations!


Yesterday's LPOD: A Basin or Just a Big Crater?

Tomorrow's LPOD: Excitement for the Future