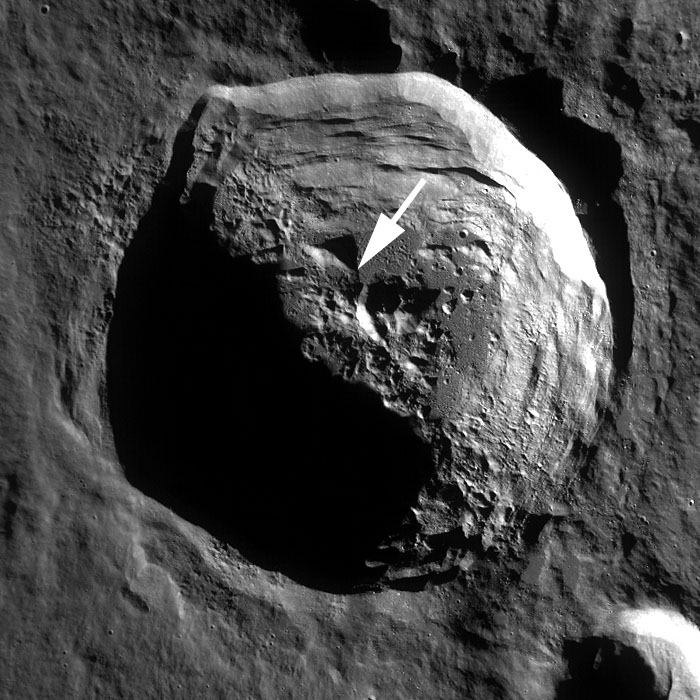 This Wide Angle Camera image from LRO highlights with an arrow the boundary between modified impact melt and anorthosite central peaks rocks seen in a Narrow Angle Camera hyper-res view. I find there is a lot to see in this wider view that is familiar because it is only 10 to 100 times better than we can see from Earth. First, besides the boulder-littered but relatively smooth impact melt on the crater floor there are two nice ponds just SE of the crater's rim and a few smaller ones outside of the rim on the right. Second, the top part of the opposite wall is brighter than the material lower down the scarp. I wonder if the bright layer is fallback ejecta of the bright anorthosite material, or if it is simply bright because, like rays, it is pulverized ejecta? Third, the six to ten small scarps hugging the opposite side are where the wall has collapsed along a series of faults. These did not make flat-topped terraces, but are more organized than chaotic slump blocks. Fourth, near the summit of the near wall on the ESE are micro-thin scarps basically similar to the bigger ones visible on the opposite side. This shows that concentric faults readily form inside crater rims, ready to slide downward when distrubed by nearby impacts or seismic shaking from more distant events. Oh yes, the 50 km wide crater is Anaxagoras.

Tomorrow's LPOD: The Unfamiliar Side of Orientale