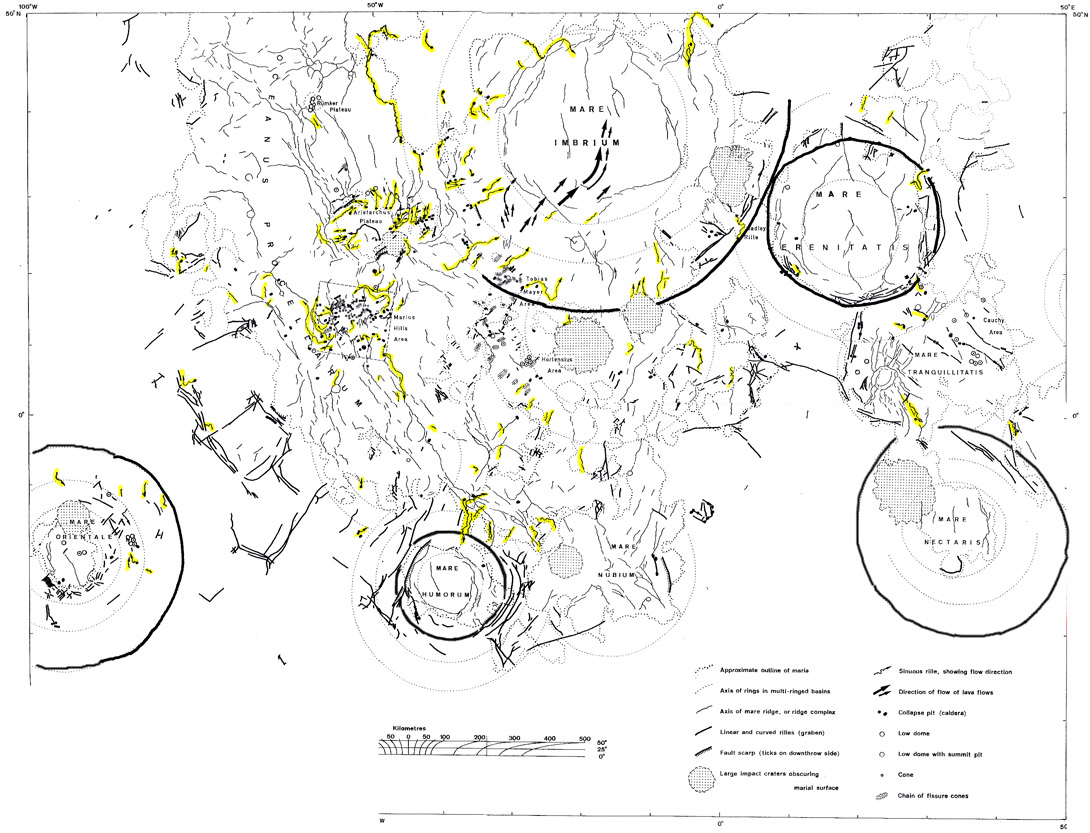 If Asimov could have laws for robots why can't Wood have rules for rilles? Today while looking at a complex map of lunar volcanic landforms I realized that there was more regularity to the distribution of sinuous rilles than I was aware of. John Guest and John Murray included this foldout map in their 1976 paper on lunar volcanism. The original map has about half of the lines and symbols in red, indicating a volcanic origin for the features shown. To make the sinuous rilles more visible I photocopied the map in black and white and then used a yellow highlighter to trace just sinuous rilles. Look at them and see what patterns you can detect. Here are my rules for sinuous rilles:
1. Rilles originate on mare material (only a few exceptions, such as those around Plato, but there may be lavas under the crater and basin ejecta).
2. Rilles are dominantly in the central and western mare
3. Rille sources (vents) occur preferentially near outer basin rings, or in the area between rings - not within the inner ring.
4. Rilles flow downhill, which is almost invariably toward the basin center.
5. The Aristarchus Plateau and the Marius Hills are non-basin concentrations of rilles, flowing away from their uplifted centers.
The fact that many sinuous rilles have sources near basin rings makes sense, for the rings mark major fractures that provided conduits for magmas to rise to the surface. The lack of rilles in the middle of basins (where there is also a lack of domes, cones and other volcanic structures) is consistent with surfaces bending at the margins of basins (creating conduits) and being compressed in the center due to subsidence into a bowl-shaped cavity. The concentration of sinuous rilles (and domes) in the western maria is a spatial coincidence with the Procellarum KREEP Terrain, but it is not known if there is a physical/chemical/geological connection.

Tomorrow's LPOD: I'll Drink To That