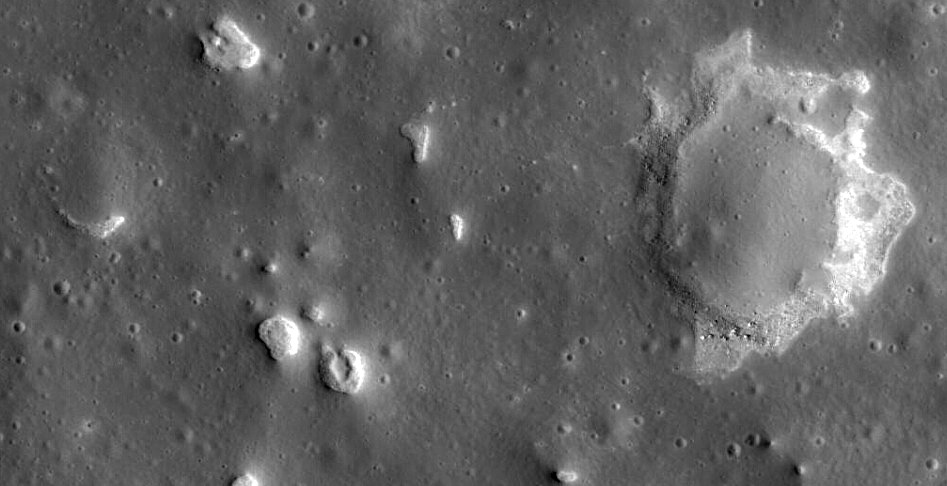 The peculiar depression Ina has a bizarre floor of rubbly hills and islands of smooth terrain. Sorting through the LRO images released on March 15 I found this image of part of the floor of Hyginus crater that looks similar. The largest roughly circular feature is 350-400 m wide, but it is not clear what the feature is. Smaller circular to irregular depressions are across the scene. The arcuate depression on the left looks like it continues as a circular feature covered by the darker material. But if Hyginus is like Ina, the dark smooth material is as old as maria outside Hyginus, suggesting that it is not a younger deposit. Thus, it seems that something is removing the terrain under the original mare surface. Like Ina, Hyginus is thought to be a volcanic collapse depression. Perhaps volcanic gases dissolve the regolith in volcanic craters causing this characteristic pattern. But what gas would do this? Comparison with the 43 year old Orbiter V image reveals no obvious changes so the process does not appear to be active on a human timescale.

Related Links
Rükl plate 34
Note that Pete Schultz and colleagues included Hyginus as an Ina-like object in their 2006 paper.


Yesterday's LPOD: The Case of the Missing Rim

Tomorrow's LPOD: How Thick Are Rays?