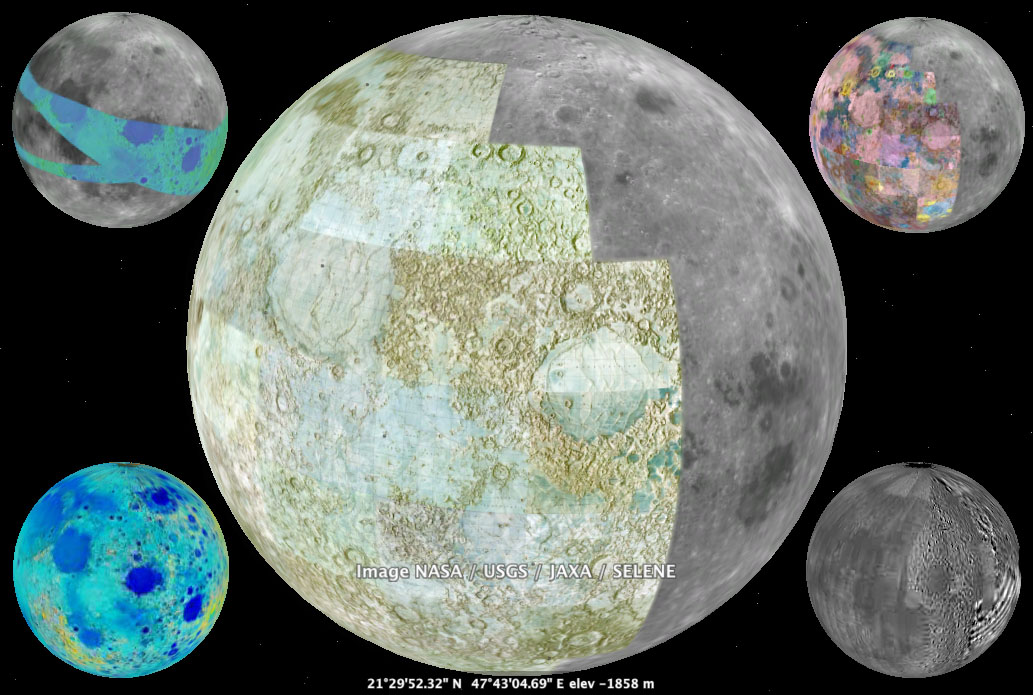 There are many sources of lunar images and maps, so many that I often turn from one web site to another to another when writing LPOD. The Moon version of Google Earth provides a number of useful lunar resources in an easy to use format. The large central image depicts two of the data types. The right side shows part of the Clementine mosaic which is a base layer for Google Moon. The green and yellowish map overlay shows the US Geologic Survey's topographic maps from the 60s and 70s. The small circle at upper right depicts the Survey's geologic maps from the same era. At bottom right is the Survey's Lunar Orbiter global mosaic which is terrible until zoomed in enough for contrast to appears - I have heavily enhanced the image to make anything visible other than a gray haze. At upper left the crossing color strips are the recently released topography from Apollo Metric Camera stereo images - a generation too late to have any scienctific impact. Finally, at bottom left is the global altimetry from Kaguya. Except for the 40 year old geologic maps these data sets are now outdated by the images and topography derived from Lunar Reconnaissance Orbiter. But these image sets are still useful, in fact, more so since they are extremely easy to access through Google Moon. It is far faster and more intuitive to look at them with the Google interface than any other I know. And this is the only place where the Survey's air brush topo and geologic maps are wonderfully mosaicked into a continuous display. I wish that the new LRO images and the Clementine and Kaguya compositional data were all available on Google Moon. But perhaps amateurs can do as Andy Chaiken did and add LRO and other layers. Google Moon is very useful as a display tool, but it doesn't facilitate quantitative analysis; the Lunar Mapping and Modeling Project (LMMP) provides some of that capability but isn't as easy to use (and for some reason won't work today).