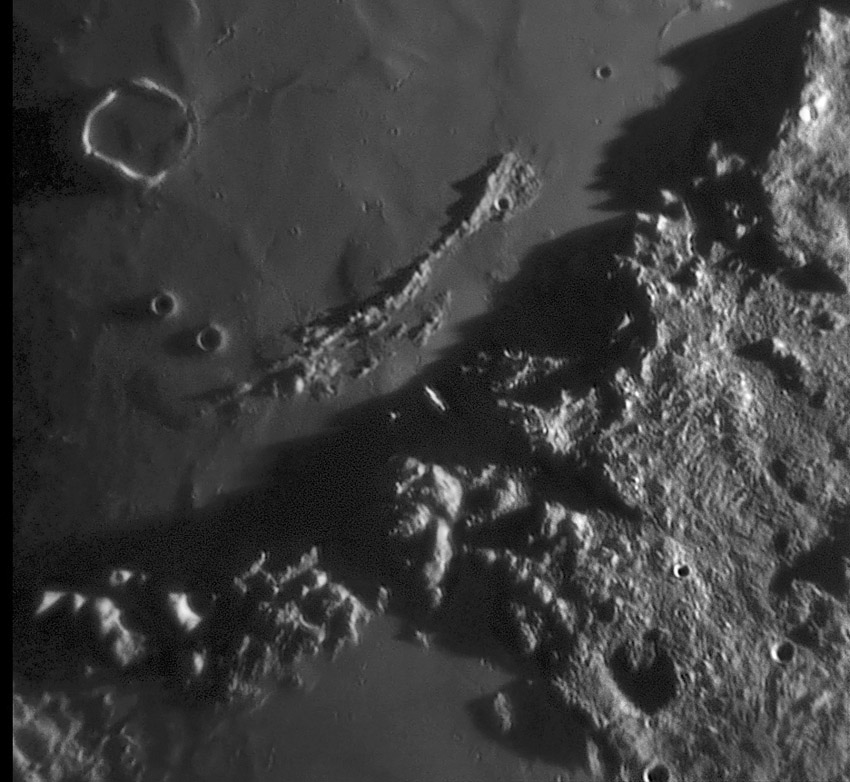 This is a scene of contrasts, most obviously the relatively smooth mare surface and the very rough Apennine Mountains. Each has areas of interest. Within this corner of Mare Imbrium there are two types of low elevations, mare ridges and swells. The ridges may be related to buried basin rings, but it is surprising that the unnamed mountain ridge west of the Apennine front doesn't have a mare ridge continuing it northward where presumably it continues under the mare. The lack of the mare portion of the ridge suggests that if a northern continuation does exist it was abruptly faulted downward far enough that the mare surface wasn't deformed. The swells are probably volcanic intrusions that lifted up the mare surface but didn't erupt. There are three possible swells on the western side of the narrow ridge, with the least certain middle one being cut by a small rille. Another swell is attached to the rim of Wallace, a crater completely covered by mare lavas except for its rim crest. Compare that with the rimless depression Marco Polo L near bottom right. L may have been a normal impact crater who exterior was completely covered by flows of Imbrium ejecta, but it looks weirder than that, as if something different formed it. North of L is a broad swath of the Apennines that has a series of apparent ridges paralleling the Apennine Front. I wonder if these ridges are layers that were originally flat-lying but when the Imbrium impact occurred were flipped up and on their side? Is this a cross section of the country rocks originally at the edge of the basin?