The Case of the Missing Rim 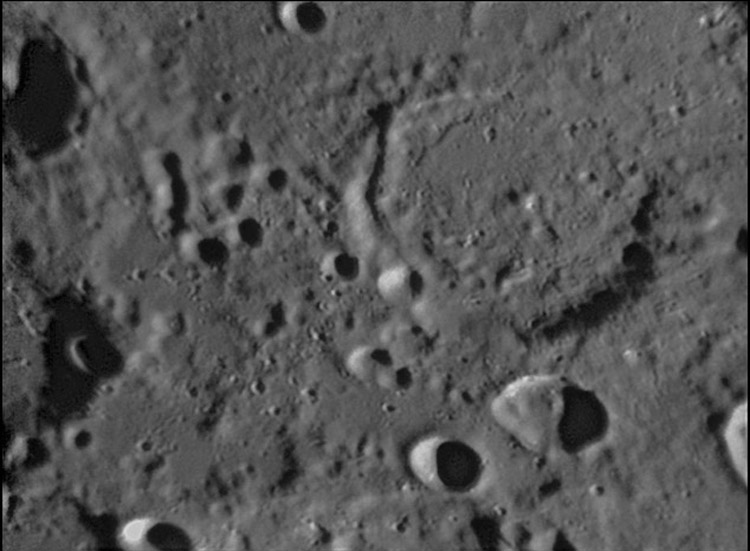 I was wrong. When I first saw this image - it was south up then, as if that’s an excuse - I thought it was Wurzelbauer. But its a slightly smaller crater about 300 km to the east. Lexell is like Fracastorius - it formed on the edge of a large depression (Deslandres in this case), and the seaward side of the crater has somehow been destroyed. We don’t really know how seaward sides of crater rims are removed. Most are flooded with lava from the mare they are on the edge of, so the assumption is that somehow the lava has destroyed the rim. But how? I have studied cinder cones on Earth. Often a portion of the cone is missing, but you can usually see it, either rafted away by a lava flow or chunks litter the surface, showing that an explosion disrupted it. But lunar craters that have lost part of their rims give few clues. Lexell is very shallow and its central peak is short - it looks like the crater has been partially filled with some material, probably the same stuff that fills Deslandres. But the floor of Deslandres is not dark at full Moon, so it is unlikely to be mare basalt. If Deslandres was shallowed by basin ejecta - an alternative hypothesis - then that flowing material must have demolished or swept away Lexell’s missing rim. Perhaps that is the origin of the odd hills at the south end of Lexell’s floor - bits and pieces of its displaced northern rim. The rille on the northwest edge of the floor is evidence for flow of some of the floor filling, but was it lava or fluidized basin debris?


Yesterday's LPOD: A Little Bit of the Wall