Difference between revisions of "January 4, 2020"

Curves Near the Shore 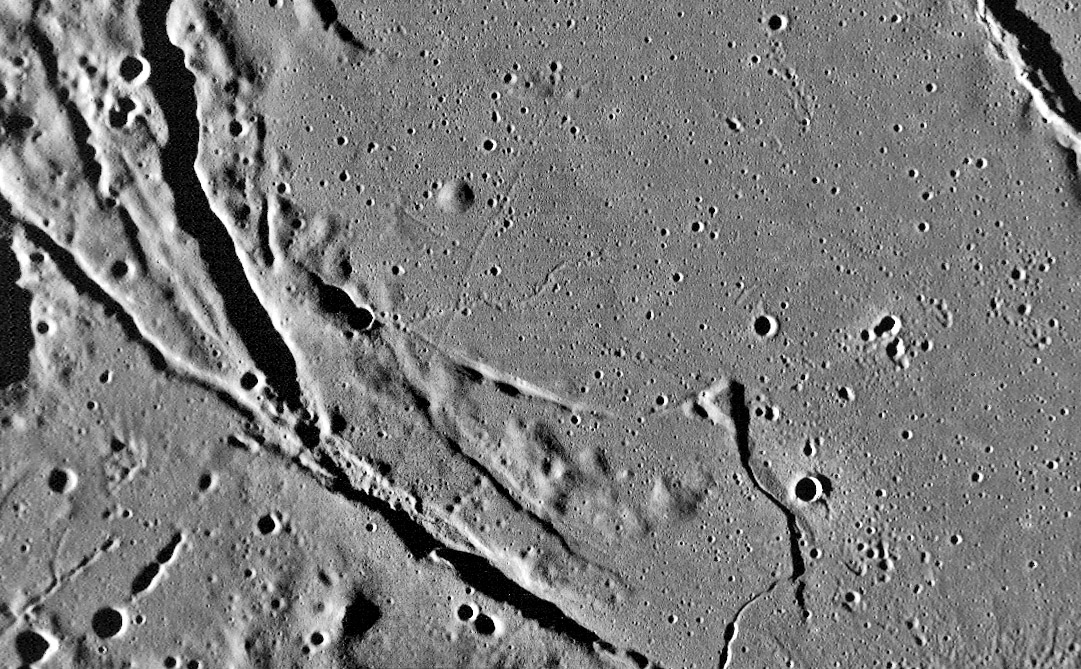 Do you see a big dome in the middle of the image? If not, forget about it for a minute and look at this land of rilles and graben. The major, shadow-casting feature (1 on the image below) is the Sulpicius Gallus Rille along the southwestern shore of Mare Serenitatis. Much smaller rilles of various types are nearly perpendicular to this main rille that marks they axis of bending when the center of the basin subsided. Rille #2 is an odd angular one that is younger and cuts that mare basalt that embayed #1. This little rille is interesting because part of its left side is raised, casting the shadow, and the right side also appears uplifted. This rille enlarges into an elongated chain of collapse pits at the bottom of the image. Exactly the same sort of collapses occur at #3, which leads to a larger circular crater that would be considered an impact accept that it is rimless. Smaller and fainter rilles cross near the center of the image. Look closely and you will see a subtle edge that hints at a low dome, outlined by the circle on the image below. The two linear (even if one is curves) and the tiny sinuous rilles stop exactly at the edge of the dome defined by the edges and the darker hue. An opposite lighting Apollo 17 image confirms the edge of the dome, but with a slightly different outline than detected here. The truncation of the rilles suggests that this may not be a volcanic dome but a kipuka - an older area slightly higher than the surroundings, which are covered by later lavas. Finally, what is the conical hill? From its shape and association with rilles it might be a volcanic cone, but there is no morphological evidence to make that interpretation more than a guess. 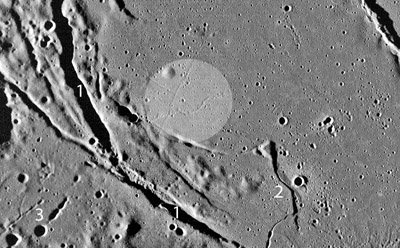