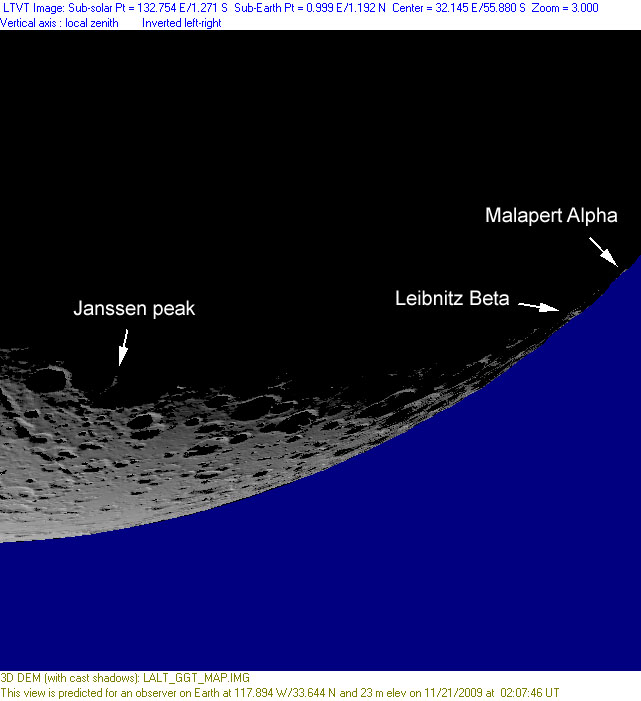 I just received an iPhone message from Chuck Wood saying he would be unable to post an LPOD for today and possibly Sunday. I don't know what the problem may be, but I would like to take this opportunity, on behalf of his many readers, to thank Chuck for the tremendous effort he has put into producing LPOD's for the last many years, and also to thank the Kaguya scientists for the wonderful new data that has inspired the last several, and for their commitment to making it publicly available over the internet. The image shown above is not a photo but rather a computer simulation based on some of that data. As I write this it is a pleasant fall evening in Newport Beach, and for the first time ever I have an opportunity to shuttle between the desktop computer in my dining room and my little alt-az mounted 4-inch diameter Maksutov telescope on a tripod in my front yard, comparing the computer's latest Kaguya-topo-based "image" with what I actually see along the terminator in the eyepiece. The resemblance has been startling. The experience is even more eerie because, by complete chance, this happens to be an evening on which, for me, the Janssen peak, which selenographer Ewen Whitaker -- rightly or wrongly -- thinks to have been one of the first features ever seen on the Moon by Galileo, happens to emerging from darkness as the Sun sets, very much as Whitaker believes it appeared to Galileo. When I started two hours ago, my eyes could see slightly finer detail than could be predicted from this moderate-resolution Kaguya altimeter data. Now, as the Moon approaches the horizon and the seeing deteriorates, the Kaguya altimeter (and my computer) definitely have the edge, predicting detail too fine for me to verify. This should be a wonderful resource for simple observers of the Moon like myself. Hats off to the Kaguya scientists and Chuck for making this experience both possible and interesting!

Technical Details
November 21, 2009 at 02:08 UT based on Kaguya global Digital Elevation Model gridded at 16 points per degree (1.9 km nominal resolution) as processed and released by Y. Ishihara and H. Araki. Simulation prepared with a development version of the LTVT software. The image is mirror reversed left-to-right and shown in the exact orientation in which it appears in a telescope whose rotation axis is aligned with the local zenith.