Difference between revisions of "January 25, 2020" 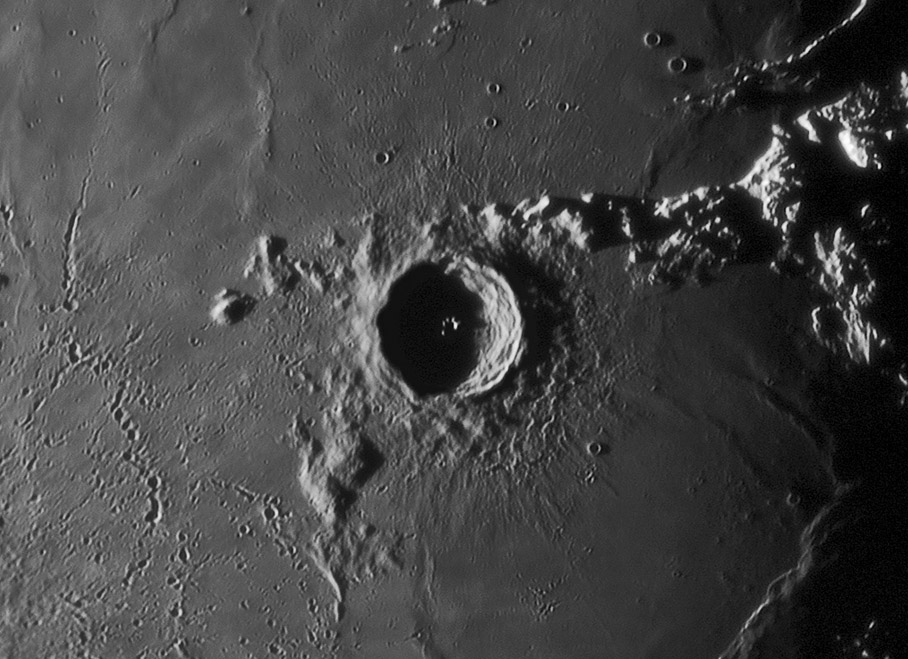 My topic of interest is centered in the excerpt from one one Stefan's excellent new images, but I bet you don't notice it. Look closely before reading on. Right in the middle of the image is the delightful fairy ring of bright summits of Eratosthenes' central peak complex. This is really perfect lighting to capture these nearly same height peaks, but that isn't what caught my eye. Look at the radial ridges and secondary craters surrounding Eratosthenes. To the north this radial ejecta extends to the top of the frame, nearly two crater diameters beyond the crater rim. But to the south the ejecta-modified surface barely extends one crater diameter. To the east of the crater the radial features don't extend far either, and to the west, confusion with debris from Copernicus makes it hard to judge the extent. What might explain this uneven distribution? It is possible that Eratosthenes formed by an oblique impact, with a projectile from the south preferentially carrying ejecta northward. But that idea isn't supported by any other evidence. Another possibility is that the lava in Imbrium north of Eratosthenes is older than the crater, whereas lava to the south and east is younger. This may be, but crater counting here is complicated by the huge number of secondary craters (what a nuisance Copernicus is)!


Yesterday's LPOD: To Be or not To Be - a Volcano

Tomorrow's LPOD: Too Young To Stand by Itself