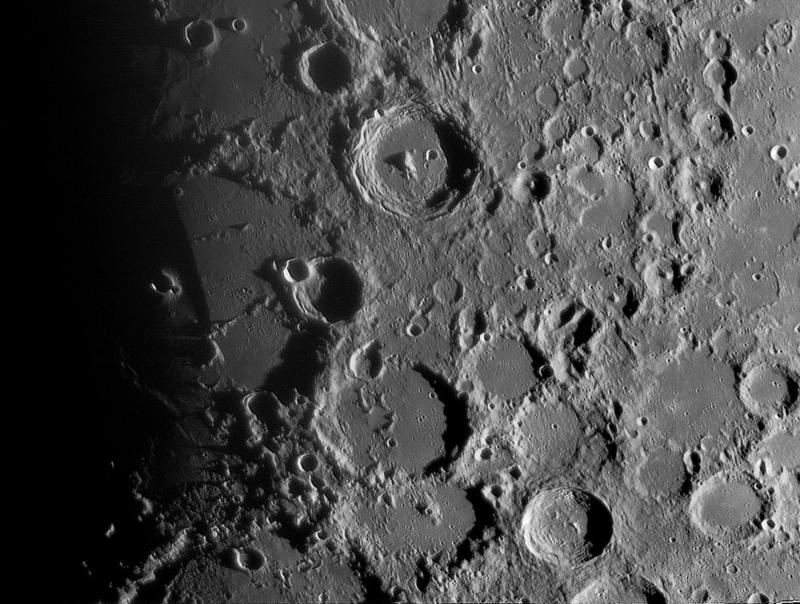 Straight lines are rare on the Moon. The fundamental geometric shape of the solar sytem is the circle, from the outline of the Moon and other worlds to their basins and the craters. But there are two types of linears in Nicolas' recent image. Most conspicuous is the abrupt shadow line of the Straight Wall, which lowerd the western half of the floor of a large older crater informally called Ancient Thebit. Nearly paralleling the Wall to the east are a series of narrow, ridge-edged troughs known, again informally, as Imbrium Sculpture. Both the Wall and the Sculpture may have related origins for both are roughly radial to the Imbrium Basin. Imbrium Sculpture is lines of basin secondary craters, and perhaps fractures, formed when the Imbrium Basin did. The Straight Wall is a few hundred million years younger, having obviously formed sometime after the eruption of the Mare Nubium lavas. The subsidence of the western half of Ancient Thebit and the fracturing that created the Wall were probably related to subsidence of the Nubium Basin, but residual stress in the crust from the formation of Imbrium may have guided the orientation of the Straight Wall fracture.

Tomorrow's LPOD: Pieces of the Moon for Maxi