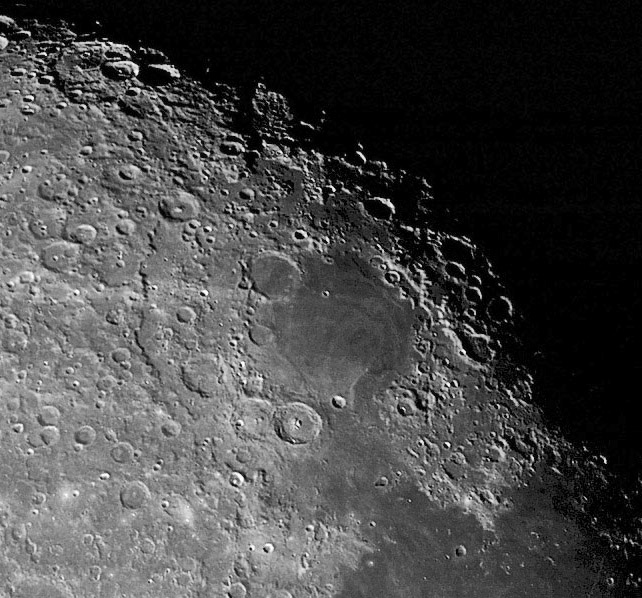 Yes, I know this image is reversed east to west, but looking with unfamiliar perspectives is always a way to make scenes fresh. Three things especially stand out. First, the multi-ringed nature of the Nectaris Basin is clear. Even the somewhat battered inner ring between the Atlai Scarp and the mare edge ring passing through Fracastorius and Theophilus is well documented by its hills that separate two smoother moats. The second obvious feature is the bright swatch that comes from the highlands on the left,and crosses the basin rings. At first I thought this might be a reflection in the camera because it is so obviously draped onto the the landscape. And then I realized that this is the famous ray from Tycho that strengthens beyond Rosse, the little crater on the mare near Fracastorius. The reality of the third feature is less certain. Do you notice the three curved gray arcs on the right side of the mare? Since this image was made with just a single image, perhaps they are artifacts. But they appear in another similar " rel="nofollow view from three years ago. What do you think they are?


You can support LPOD when you buy any book from Amazon thru " rel="nofollow LPOD!