Difference between revisions of "January 2, 2020" 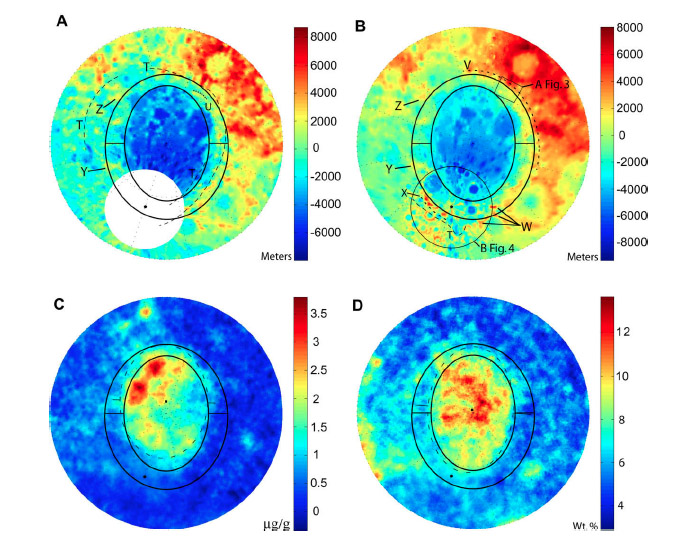 image from Garrick-Bethell and Zuber (2009) Icarus. A is Clementine-derived topography; B is ULCN2005 topo, C is thorium abundance; and D is iron abundance. The white circle in A is where data are unavailable, and the bLack circle in B marks the same area.

The shapes and sizes of old impact basins are often difficult to define because they have been strongly modified by later events. The oldest (or perhaps second oldest if the Procellarum Basin is real) basin, South Pole-Aitken (SPA) falls into the category of difficult to define. A few pieces of its putative rim show up as large isolated mountains, or massifs, near the South Pole, a beautiful, but short arc was imaged by the Apollo 8 crew, and topo maps reveal a 90° scarp (the edge of the red) at upper right in map B above. In 2009, MIT researchers Garrick-Bethell and Zuber identified edges in maps of three data sets - topography, iron and thorium abundances. They then made a statistical fit to these boundary points and determined that SPA is elliptical, not circular in outline. In the maps above they include both their original elliptical outline (inner ellipses) and an outer one that is mostly defined by the 90° scarp. Because the SPA outline is elliptical, Garrick-Bethell and Zuber conclude that the giant basin formed by an oblique impact, with the projectile perhaps coming from the south. This careful analysis was conducted with relatively sparse topographic data from Clementine; the new high resolution LRO altimetry data have led to different speculations - more thorough studies are needed.