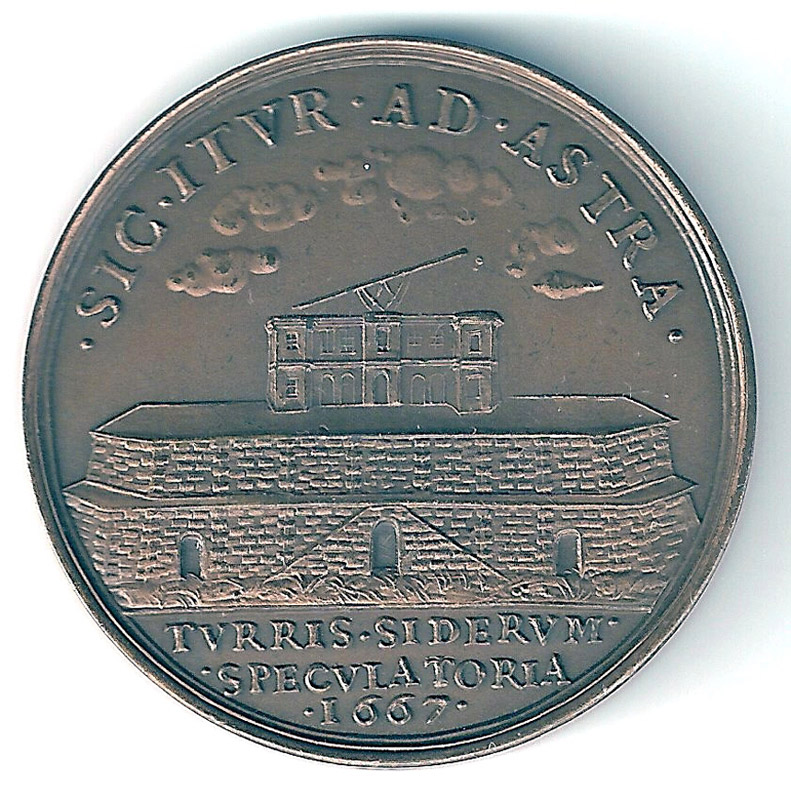 Thus one goes to the stars is the translation of the Latin along the top of the medal commemorating the foundation of the Paris Observatory in 1667. The quote is from Virgil's Aeneid, lib. IX, linea 641. It serves a triple purpose here; the literal meaning offers a direct connection with astronomy; it's as good as saying "the only way to investigate the heavens is to employ people who know what they're doing, using proper equipment, in a royal foundation". Secondly, to cite the Aeneid, the foundation myth of the Augustan regime in Rome, is to connect Bourbon France with the glory of imperial Rome. Finally, to use a classical tag for an observatory motto shows that the patron and by extension his academy astronomers function in that elite culture, for the work of the observatory is in the millennial long tradition of serious astronomy buoyed by royal support. There's nothing simple about Big Science patronage!

The line at bottom, TVRRIS SIDERVUM SPECVULATORIA 1667 on the bottom (or exergue for coin collectors!) translates as Observing tower of the stars, [founded] 1667. This telescope is huge and although they did use telescopes that long, I believe there's some exaggeration going on here. The telescope tube as shown in relation to the building is about 1.3 metres in diameter - I think that's larger than the Yerkes OTA! Another practical problem a user of such a telescope would have encountered would have been restricted movement in azimuth; unless the observer could walk on air, much of the sky wouldn't be accessible to him. So the telescope is iconic, functioning almost like a badge; one of Cassini's contemporaries looking at the coin would know the building's meant to be an observatory because there's a whacking great telescope on top. And the relation to the Moon is that Cassini's beautiful lunar map was made at the Paris Observatory.

Technical Details
Photo from "Paris 1675: The Earliest Known Drawing of the Mare Orientale Complex" by William Sheehan, Françoise Launay and Randall Rosenfeld (in press in the Journal of the Royal Astronomical Society of Canada (English) and in l'Astronomie (SAF)// (French)).