How Thick Are the Alps? 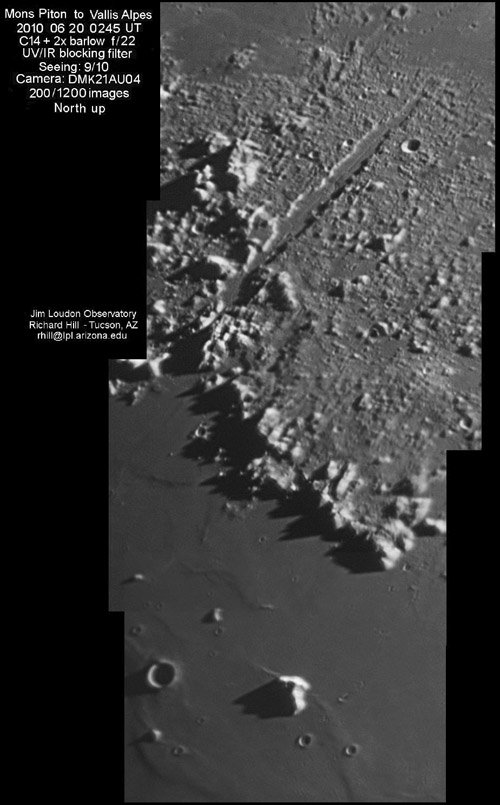 LPOD has published a few images of the lunar Alps and typically the Alpine gash steals attention. In looking at Rik's recent view I realized something that I hadn't noticed before. There aren't any obvious impact craters exposed in various stages of destruction under the Alps. The Imbrium ejecta layer at the Alps does not look nearly as thick as that of the Apennines further south. In fact, once you look beyond the mountains along the front of the Alps, the small hills - I almost wrote boulders but they are a few kilometers wide - seem to be sitting on an underlying smooth surface. More likely, the smooth material is subsequent mare lavas that embayed and buried the lower parts of the ejecta, including any earlier craters on the pre-Imbrium surface. Are the Alps equivalent to the tops of Apennines, as seen if the low areas of the Apennines were submerged by lava? It doesn't look like it to me; they look texturally different. I suppose I should check Wilhelms and other US Geological Survey mappers of the 60s and 70s to see what their explanations were. And it would be interesting to compare changes in elevations radially away from the fronts of both the Alps and the Apennines. Of course, the Apennine front is higher, but my impression is the entire wedge of Apennine ejecta is much thicker than the Alps wedge, which looks rather flat. LRO altimetry data should provide nice profiles...

Technical Details
See image. Registax 5 used for the coadding of images and wavelet filtering and then iMerge for the making of the montage and PhotoWise plus Gimp for final touch up.

Tomorrow's LPOD: Before the CCD