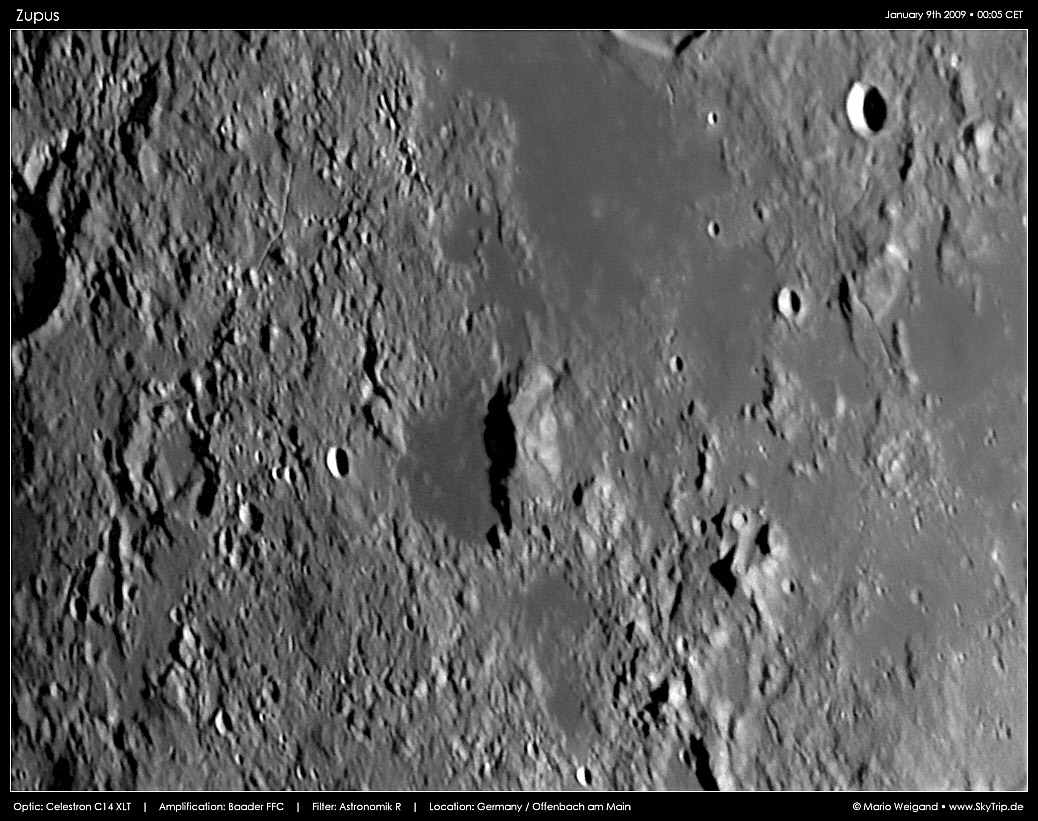 Zupus is the dark patch near the center of this frame. It's name implies that it is a crater, but is it? It doesn't have a rim, just a massive ridge to its east. The name was given by Riccioli, whose view of it was vastly poorer than Mario has provided us. Look at the surface texture surrounding Zupus - it is rough and there are small hills sticking out. This surface material is basin ejecta, which could be from the Orientale Basin to the west or the Imbrium one to the north. I would guess that the ejecta destroyed all the rim except for the remaining ridge. The floor of the ex-crater remained a low spot, and fractures under the crater allowed mare basalts to rise up and erupt on the surface. Two sets of rilles are also well shown here. At the 11 o'clock direction from Zupus is an unusual non-mare rille. We named it Zupus I, back in the 1960s when I worked on the System of Lunar Craters. And in the 2 o'clock direction is another non-mare rille that heads north and then looks like it might bend to the right. In the System we though the north-south part extended all the way to Billy, whose rim is just visible at the top, and we called it Billy I. Billy II was the little rille that extends to the northeast; it is probably too inconsequential to have a designation. Mario's image, which is far better than anything we had in the early 60s, shows that Billy I is shorter than we thought and doesn't reach Billy, but it does appear to extend further to the south, skipping the blocky patch of ejecta. It is nice to be able to update my earlier work! Notice also the arc that curves from bottom right up to Billy. This may be all that is left of a large crater, mostly destroyed by the ejecta.