The Tyranny of an Orbit 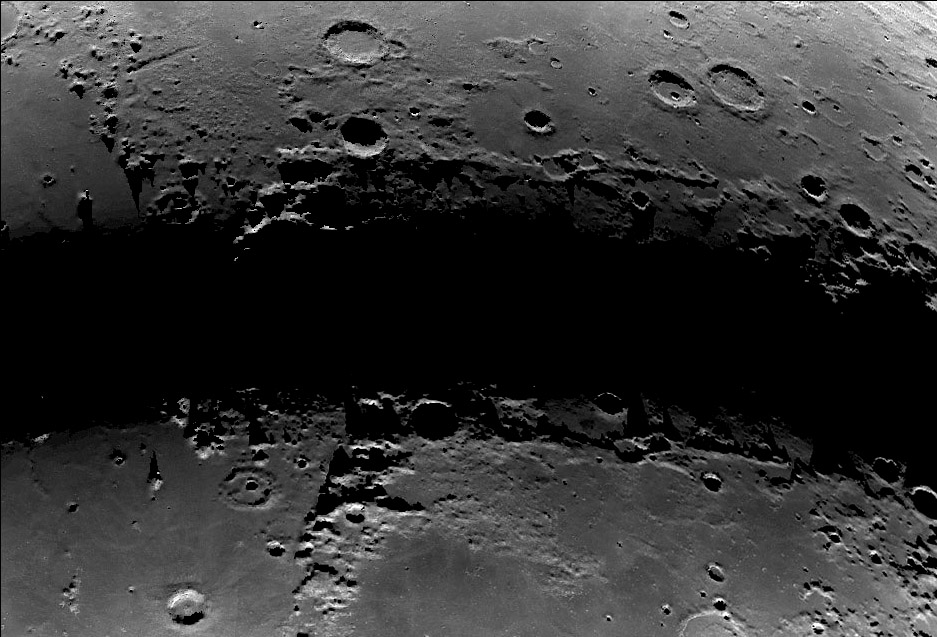 Except for a few oddities such as Saturn's moon Hyperion, which is in a chaotic orbit, the orbit and tilt of a planetary object determines where the Sun shines, and thereby how surface features are illuminated. The Moon's polar axis is only a few degrees away from being perpendicular to the ecliptic (Earth's is tilted 23.5°) so that the Sun shines from the east or the west, with relatively small excursions north and south due to librations. This has always been a hindrance to scientists who wanted to map linear features, especially low ones, because its easier to detect ones perpendicular to the Sun's rays. This means that N-S ridges and rilles are easier to detect, because of long shadows, than E-W aligned ones. But as Maurice demonstrates, the existence of a high resolution digital terrain model (DEM) - in this case from Kaguya - allows a virtual Moon effectively to be rotated so that the Sun can shine from any direction. Here he has joined at a faux terminator two different looks at the long ridge he first noticed earlier on a normally illuminated Kaguya DEM. With these illuminations - from the north above and the south below - the reality and continuity of the ridge are better appreciated. The large heavily shadowed crater near the left end of the ridge is Eudoxus, with Plana and Mason being the pair on the edge of Lacus Mortis, and the ruined feature Williams at the east end. This Eudoxus-Williams ridge does appear to be real and not just an accident of lighting. Presumably the western end of the ridge is a linear pile of Imbrium ejecta, but is the distant east end? If so this would be equivalent to a basin ray.

Technical Details
Maurice used LTVT to rotate the Sun and the Moon - I bet he is feeling god-like right now!