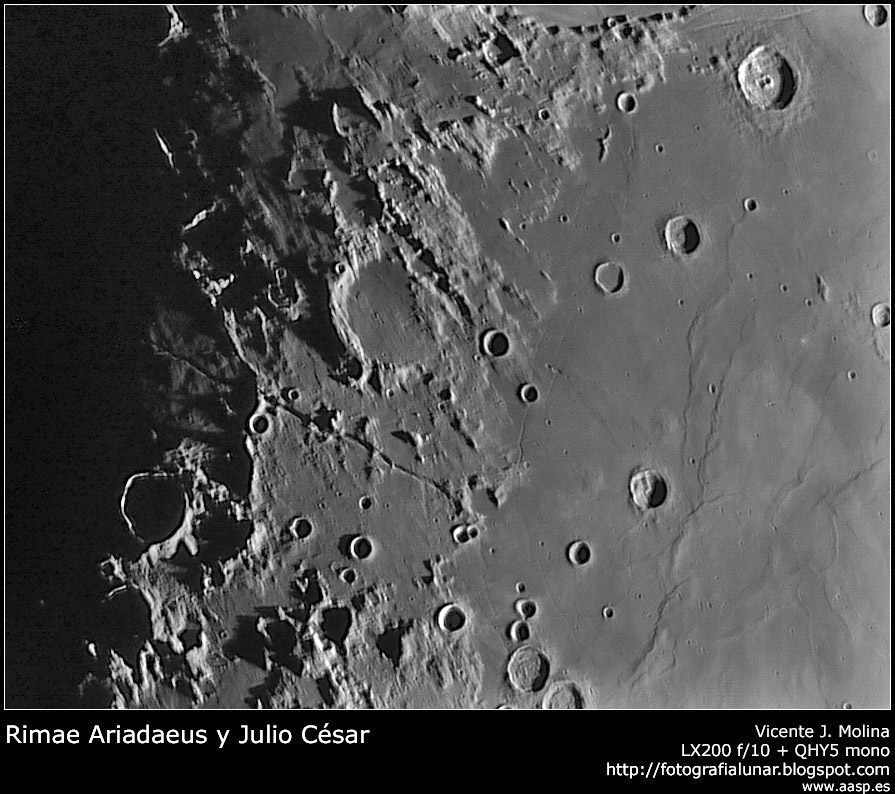 The boundary between two geologic units provides evidence about both. Here we are at the western edge of Mare Tranquillitatis, with mare lavas to the right and more rugged terrain to the left. Which is older? The craters along the boundary tell the story; many have missing walls on the mare side and are embayed with lava. The mare is younger. The smooth plain cut by the Ariadaeus Rille is widely interpreted to be ejecta from the formation of the Imrium Basin, as is the more rugged material that covers some of the older craters and is visible as dark lumpiness near the terminator. So the mare lavas are younger than the formation of Imbrium Basin, not a surprise, but we have stratigraphic evidence here. The rille is younger than the Imbrium ejecta (because it cuts it), but is older than the mare lavas for it is truncated just at the boundary. I am surprised that we don't see any hints of the rille under the mare - would we if the terminator were near that boundary? At the top of the image is another rille, the Plinius Rille. It looks like the Plinius Rille continues under the Imbrium ejecta - do you see shadows that seem to mark fragmental lengths of the possible rille all the way to Julius Caesar? If this were true, does it mean that the Imbrium Impact is older than the Serenitatis lavas cut by the named part of the rille? That is impossible because there is no Imbrium ejecta anywhere on any of these lavas. What is the explanation? If the Plinius Rille formed by the subsidence of the Tranquillitatis Basin as it was loaded with mare lavas, the rille and its possible extension westward would be younger than the ejecta. But is the Plinius Rille related to subsidence of Tranquillitatis or Serenitatis? Looks ambiguous.


Yesterday's LPOD: Gerard And Me