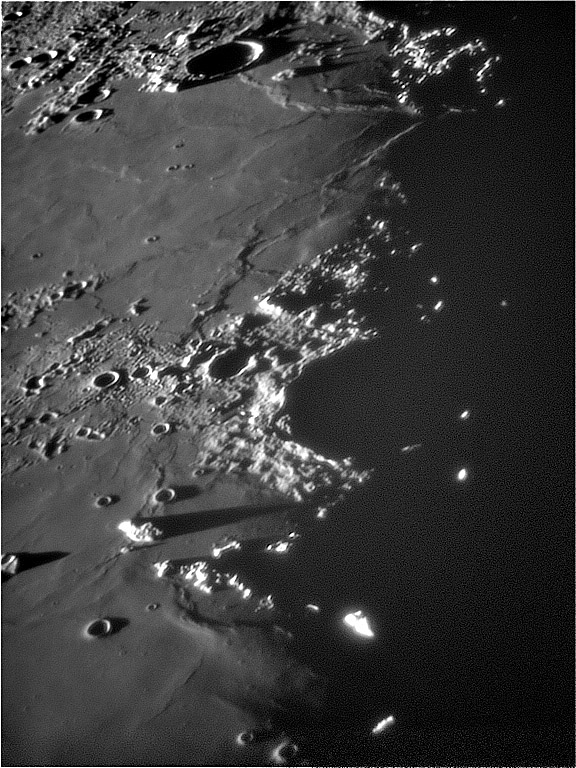 I like low, low Sun views of maria. Subtle features appear that are hardly hinted at during the rest of the month. This excellent image by Jocelyn is a prime example. It is centered vertically on Plato, whose bright western rim holds a cauldron of darkness. The lavas of Mare Imbrium in the foreground and Mare Frigoris beyond are full of swells and ridges that are otherwise inconspicuous, but we'd notice if hiking across them. The semi-circular ridge in front of the longest of the Teneriffe Mountains (in front of Plato) has been seen before, but I wouldn't have guessed that a broad ramp of mare led up to it. It must be captured somewhere, for Rükl's chart 11 includes it. The main curved ridge looks very much like a typical covered rim of a buried impact crater - a ghost crater - but the mountains are part of Imbrium's inner basin rings and dates from the formation of the basin. The geometry is impossible for a crater to exist here. So why the ridge? Before moving northward I must admire the glowing Mt. Pico, east of the semi-circular ridge. Hugging the rubbly ejecta north of Plato is another large swell that is invisible when the Sun is a little higher. And in the area, Mare Frigoris has mare ridges that aren't controlled by any obvious structure. Finally, darker tones of gray on the upper left of the mare distinguishes lava flows that seem to be very slightly higher than adjacent ones. To fully map all of a mare's surface undulations using shadow magnification would require images like this every 60 minutes - a slow speed, high resolution video.