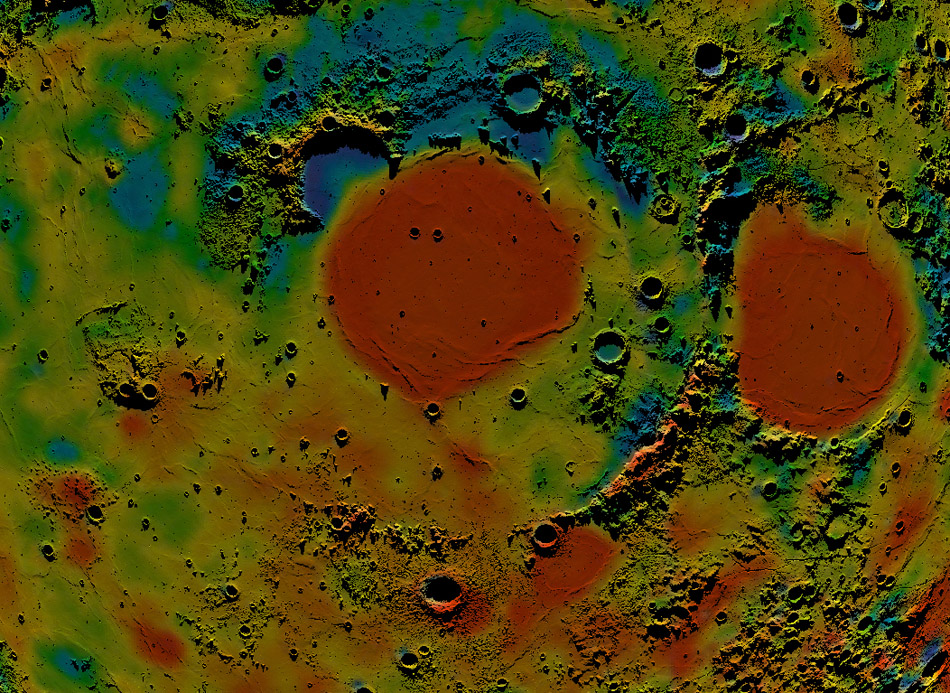 One of the first and most profound geophysical discoveries about the Moon was the lumpiness of its gravitational field. The centers of some impact basins strongly pulled on spacecraft that passed overhead. This implied an excess of mass associated with basins. These mass concentrations, mascons, were thought to be caused by the dense lava flows that filled some basins like Imbrium, and perhaps also by an upwelling of the lunar mantle under basins. Because lunar maria are typically thin - hundreds of meters thick except in basin centers where lava flows accumulated to depths of a few kilometers - it is generally considered that mantle upwelling is the main cause of mascons. With the greatly improved gravity data provided by GRAIL there will soon be newer and presumably better models to explain mascons. In the map above the excess of mass (indicated by red) is seen to be entirely within the isolated peaks and maria ridges that define Imbrium's inner basin ring. This is the area where the mare is thickest - notice the paucity of craters compared to outside the red zone - giving support to the idea that mare mass may be more important than upwelling. Nearby Serenitatis is different - its mascon occupies essentially the entire basin floor, with only a narrow bench (green and yellow) on the north and east sides. I'm not sure which interpretation this supports. Notice the small positive anomalies near Prinz and the southern side of the Aristarchus Plateau. These are probably associated with underground frozen magma that uplifted these two areas and gave rise to the sinuous rilles. Another positive anomaly is over the Marius Hills, again probably not due to the lava mass on the surface but an underlying magma chamber that fed the eruptions. Finally, look at the red anomaly over Hyginus and its rilles but not associated with the Ariadaeus Rille. This makes sense because Hyginus is probably a caldera and volcanic eruptions are associated with the rille. Ariadaeus shows no signs of associated volcanism - it seems to be purely a tectonic fracture. I await the real models to see how well they match my speculations.

Tomorrow's LPOD: Pushes And Pulls On the Edge of an Enigma