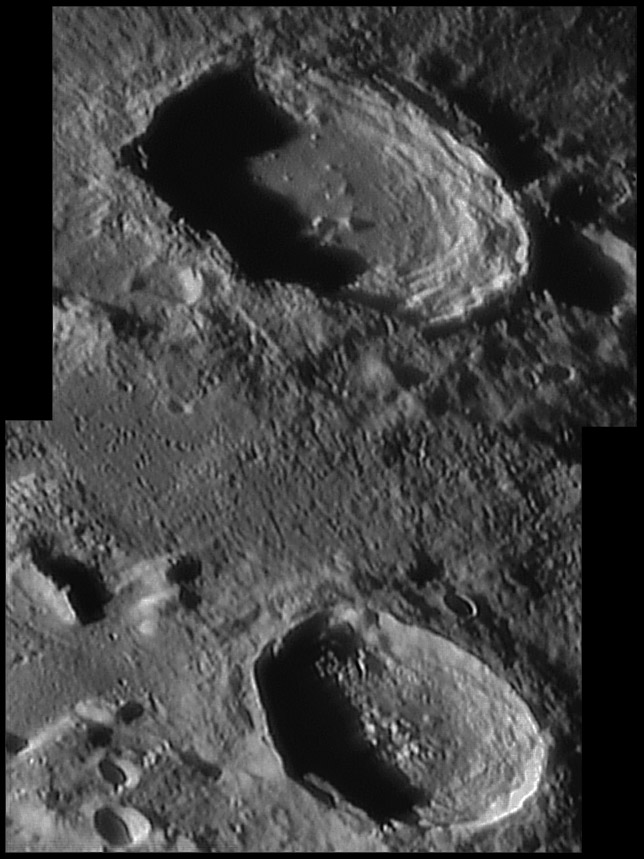 Aristoteles (above) and Eudoxus have been featured in many LPODs which have discussed, among other things, their relative ages (Eudoxus is marginally younger) and their peculiar central peaks (probably has something to do with impact onto basin ejecta). But good images keep being submitted so new things must be said. This time lets compare their glacies, the mound of material directly outside a crater's rim. By comparison to Meteor Crater in Arizona we can expect that the elevation of the crater rim is made half by ejecta that fell back around the impact point, and half by uplift or rebound of the existing rocks following the impact. But like every other morphological feature of craters, glacies are not all the same. Eudoxus exhibits a pattern often seen at fresh craters; there is a relatively abrupt change of slope at the distal side and the entire thing looks like a thick wreath. It is harder to describe the glacies around Aristoteles because of later impacts that ate into it, but it does seem to be less wide and to have a more gentle slope. Is that just due to erosional modification or did it not look like Eudoxus when it formed? And is it necessarily true that the way a glascis formed on a 1 km wide crater in the Arizona desert really has any relation to 60-90 km wide craters on the Moon?